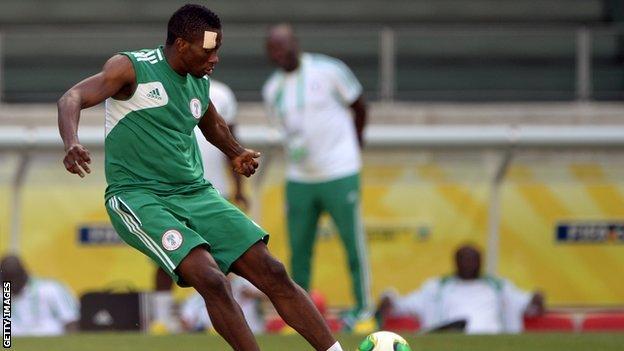 Nigeria have included fit-again Chelsea under-21 defender Kenneth Omeruo in a 25-man squad to face Ethiopia in this month's 2014 World Cup play-off.

Omeruo played all six games for the Super Eagles as they won the Africa Cup of Nations in January but then sustained a shoulder injury at June's Confederations Cup in Brazil.

He made a first appearance this season for the Chelsea under-21's on Friday.

Nigeria play Ethiopia on 16 November in the second leg of their 2014 qualifier.

They hold a 2-1 lead from the first leg as they aim to secure a fifth World Cup appearance.

Two days later, the African champions will play Italy in a friendly at Fulham's Craven Cottage stadium in London.

"It's good for us that we can recall Kenneth Omeruo and Rueben Gabriel for this crucial game and big friendly against Italy," Nigeria coach Stephen Keshi told BBC Sport.

"The game against Ethiopia is very important for the country and the players are all aware of what stands before them and a place in Brazil.

"We need to prepare very hard tactically and technically so we can make the country and our fans proud.

"It's very appropriate to describe the game in Calabar as our biggest cup final because the one in South Africa is now in the past."

The Nigeria Football Federation (NFF) hope the match against Italy on 18 November will be preparation for next year's tournament in Brazil.

The match, which will kick-off at 1945 BST, will be Super Eagles coach Stephen Keshi's first friendly against European opposition since he took charge of the side in November 2011.