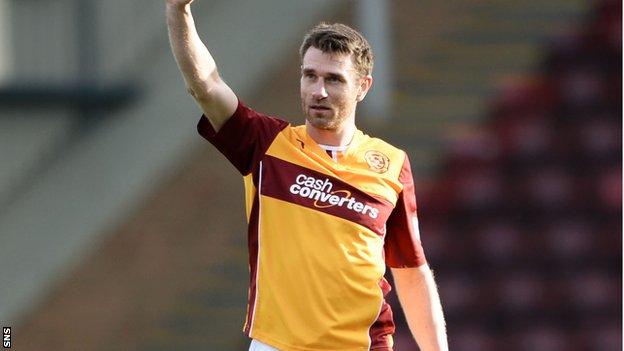 Motherwell manager Stuart McCall was pleased to end a run of two defeats with a 1-0 success at home to Hibernian in the Premiership.

Stephen McManus's first-half header separated the sides after Motherwell were reduced to 10 men and McCall said the win helped bury a bad week.

"I think we were hanging on," admitted McCall to BBC Scotland.

"But I think after a really tough week, we got what we deserved and we got the three points."

McCall was disappointed with a limp defeat at St Johnstone last weekend and his frustration was compounded by a 2-0 loss at home to 10-man Aberdeen in the League Cup.

However, the slender victory against Hibs puts the Lanarkshire side back up into third place in the league, level on 22 points with Inverness.

Despite defender Shaun Hutchinson seeing red in the final stages of the match for a challenge on Paul Heffernan, McCall said he felt is side earned the victory.

"It was a big three points after a tough week," added McCall.

"It's good character by the boys, we have to regroup for a tough game against Dundee United next week, but three of our back four look to be out.

"We didn't play particularly well in the first half but we had three or four gilt-edged chances to go two or three nil up and we didn't manage to put the ball in the net.

The win was not without its casualties as Simon Ramsden and Steven Hammell hobbled off and Hutchinson's dismissal made it a nerve-wracking finish for home fans.

McCall had no complaints over the red card and was pleased that Hibs failed to equalise with the opportunity it presented.

"Not only was it a sending off, but I thought it was a penalty kick, which would have topped the week off," said McCall.

"But it is outside the box - it's the correct decision, and even then there was the feeling that Craig and Vine standing over the ball, they were both capable of putting it in the top corner, but thankfully the wall stood strong."

The goal was McManus's first since joining the Steelmen in the summer and McCall was asked if the defender's recent run of form could lead to a return to Gordon Strachan's Scotland squad.

McManus has not featured for Scotland since October 2010 when Craig Levein was in charge for a 3-2 defeat by Spain in a Euro 2012 qualifier.

"I think to be fair to him, he just wants to concentrate on doing well and putting a consistent run together," said McCall.

"I think that was the best game he's had, I thought he was terrific at the heart of our defence.

"I think he's got to keep playing how he is and given time, if he keeps that consistent strong form he's been showing of late, then who knows?"