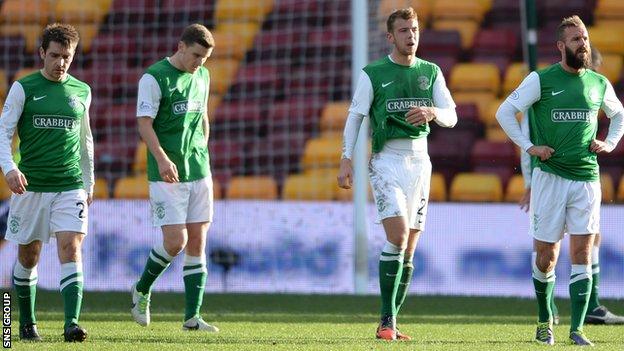 Chairman Rod Petrie insists Hibernian will not rush into appointing a successor to manager Pat Fenlon.

Inverness CT boss Terry Butcher has been heavily linked to the vacancy at Easter Road.

But Petrie told BBC Radio Scotland: "I'm not going to name any names. It's important that we take our time and get the right guy."

Hibs, who have lost three successive matches since drawing at home with champions Celtic, are searching for their tenth manager in 16 years.

"It's important that the board get the opportunity to look at all possibilities and we'll make a decision in the fullness of time," added Petrie.

"It's a great opportunity for someone."

On Fenlon's near two-year tenure, Petrie added: "Pat did well. he came in when we were at a low ebb and gave us some respectability.

"We've been to two cup finals and last season was better than average; we were unbeaten in the Edinburgh derbies."

Hibs lost out to a Stephen McManus header at Fir Park and Nicholl was frustrated that the visitors had not made the most of their second-half dominance.

"I thought we started all right for the first 20 minutes," he told BBC Scotland. "There was no atmosphere in the place and I thought that will suit us.

"Then they score - it's a lack of concentration from Ryan McGivern, who lets McManus go.

"At half time I said get stuck into them and contribute what you are capable of contributing.

"I thought we were on the ascendancy and it was just a matter of converting the chances and we didn't do it.

"Sometimes the quality in the final third wasn't great. We had bodies in the box and we never got the ball in.

"But, all in all, I really can't fault them. I thought we deserved an equaliser."

Nicholl has managed Raith Rovers, Millwall and Cowdenbeath but the 56-year-old expressed little interest in taking over the reigns at Easter Road.

"I just go into work and stay under the radar," said the 56-year-old former Northern Ireland international.

"I love working at this place. If I continue to work here, great.

"If not, I'll just move on and do something else."