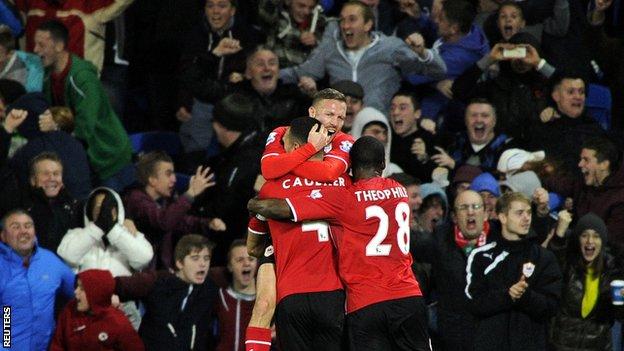 Cardiff City captain Steven Caulker says he muted his goal celebration against Swansea City out of respect for his former club.

The 21-year-old England centre-back spent the 2011-12 season on loan at Swansea from Tottenham, but joined Cardiff in an £8m deal in July.

And Caulker's header gave the Bluebirds a 1-0 win against the Swans on Sunday.

"I've always got to pay respect to a team that took me in... and I enjoyed my time there," he said.

"But I'm now a Bluebird and want to get us as high up the table as possible, so it was important for us to get the points."

The eagerly awaited match at Cardiff City Stadium was the first meeting in the English top flight between the two south Wales rivals.

After a cagey and surprisingly subdued opening half, Caulker rose above Swansea defender Chico Flores to direct Craig Bellamy's 62nd-minute corner into the visitors' net.

"It was obviously a fantastic feeling to get the goal and to get us the three points... it was my second goal this season and I hope to get many more," Caulker said.

"It was an important game for us, especially being a derby, so it was nice for all the [Cardiff] fans to go home happy and I'm sure that feeling will stay with them for a while.

"I think the first 45 minutes went quite well, we kept our shape and obviously we had more belief going out in the second half."

Caulker felt his side were "worthy winners" as they climbed into 12th in the Premier League table.

He said: "It was really intense, especially the last 10 minutes. I thought the boys did well and stuck together.

"It's a big three points and we'll go again against Aston Villa on Saturday."

A bad afternoon for Swansea was completed as they were reduced to 10 men in added time when goalkeeper Michel Vorm was sent off for bringing down Cardiff substitute Fraizer Campbell.