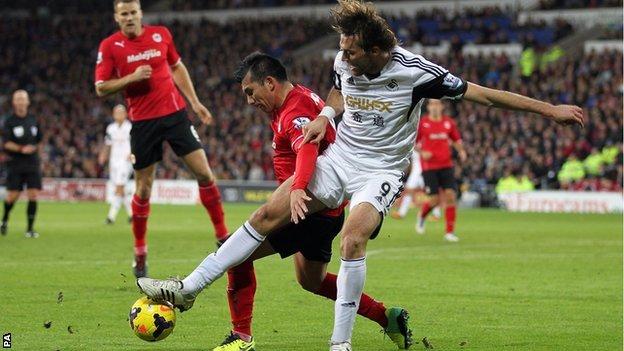 But Williams says not replacing Michu after he rolled an ankle was crucial.

"I felt like he [Michu] could have come off, I don't know what was happening with the sub but we could see that he couldn't move," Williams said.

"We conceded from a set-piece and even the 20 minutes before when Michu couldn't run, I don't know what was happening with the sub.

I'm bitterly disappointed... we know how much it means to the city and we're gutted we couldn't get the win

"He was injured and I think that's where the defining moment in the game was."

Swansea manager Michael Laudrup confirmed after the game that with his injury.

That will see the Spanish forward miss Thursday's Europa League group game away to Russian side Kuban Krasnodar, plus the home Premier League match against Stoke City on Sunday, 10 November.

After Caulker had put the home side ahead from a corner, things got even worse for Swansea in time added on when goalkeeper Michel Vorm brought down Cardiff substitute Fraizer Campbell, earning a red card.

Laudrup had already used all three substitutes - including replacing Michu with Wilfried Bony after 65 minutes - and defender Angel Rangel ended up taking the gloves for the last few moments, even tipping a Peter Whittingham free-kick over the bar.

Vorm now faces an automatic three-match domestic ban, which would rule him out against Stoke, Fulham, and then the trip to Manchester City on 1 December.

Central defender Williams admits Swansea are playing below their best at the moment but the Wales skipper says they will work hard to turn things around after their derby humbling.

"We know how much it means to the city and we're gutted we couldn't get the win for them and perform better.

"The only thing I can apologise for is the team performance - we didn't show enough in the derby to win the game.

"I'm concerned. I don't think we've hit the level where we were last season and it's something we've got to work towards.

"I've been out for a few weeks and I've had the chance to see it from the outside and... I don't think we've really got to where we need to be.

"I remember a period last season - September or October maybe - where we weren't playing too well and then we turned it around with some big wins.

"We've been here before and we need to just work through it."