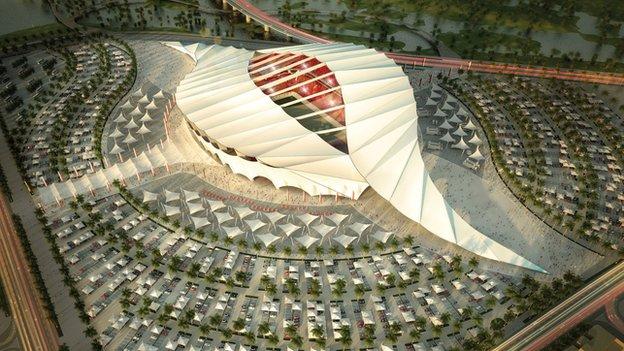 Winter sports federations have been urged to fight any plans to move the 2022 football World Cup to the winter.

Football governing body Fifa has set up a taskforce to consider alternative dates after concerns over high summer temperatures in host country Qatar.

But the International Ski Federation (FIS) fears its sport could suffer.

The huge implications of moving the World Cup in 2022 from summer to winter are now starting to be witnessed.

This is a coded warning by the IOC but it can be perceived as a blow to Uefa president Michel Platini and others who, for strategic reasons including the scheduling of the Champions League, want the tournament to be held in January and February.

The other options under discussion in Fifa circles are November/December or playing in April/May, when temperatures are still bearable in the Gulf state.

Sheikh Salman, a Fifa vice-president and head of the Asian Football Confederation, is starting a process of consultation with the main sporting and economic stakeholders.

An update is expected to be given at Fifa's next executive committee meeting in December but a final decision is not due until late 2014 or even early 2015.

"FIS will submit a proposal to the six winter sports federations to sign a resolution against organising the World Cup during the winter," it said.

The International Olympic Committee (IOC) is also monitoring Fifa's plans, as any switch of the 2022 World Cup could impact on that year's Winter Olympics.

The 2022 Winter Games take place in January and February and the IOC has previously stated it expects Fifa to consult with it to avoid any clash.

The IOC held a meeting over the weekend, chaired by new president Thomas Bach and attended by Fifa president Sepp Blatter.

Afterwards, it released a statement which read: "With respect to the sports calendar, the participants agreed that any new initiative has to respect the uniqueness of the Olympic Games.

"It means that neither the Olympic programme nor Games revenues should be adversely affected in any way.

"In order to ensure the respect of these principles, the participants agreed to the creation of a consultative working group under the leadership of the IOC, composed of the main stakeholders of the Olympic and sporting movement, which will compile a comprehensive sporting calendar of current events.

"This working group will also discuss the priority of current and future sports events within the global calendar."