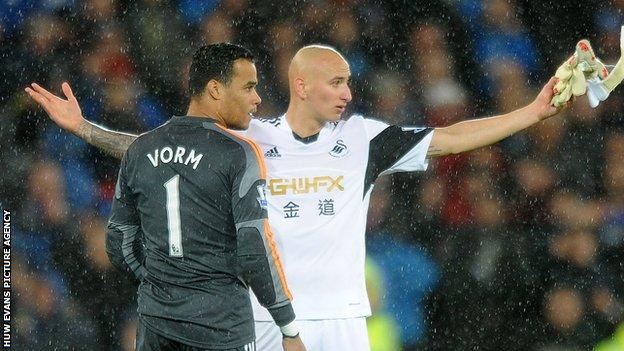 Jonjo Shelvey will not face disciplinary action over a provocative gesture during the south Wales derby against Cardiff.

After Swansea lost 1-0 Shelvey appeared to make a gesture known as 'swim away'.

It refers to an alleged in 1988 incident when Cardiff fans went into the sea as supporters clashed.

An FA spokesman said: "Following an investigation, the FA has reminded Jonjo Shelvey of his responsibilities. No further action will follow."

Swansea are in Russia for a Europa League game against Kuban Krasnodar, but the former Liverpool midfielder has not travelled because of "family reasons".

The match against Cardiff was the first between the clubs since 2011, and their first ever meeting in English football's top flight.

There had been concerns over potential trouble betweens fans,but South Wales Police tweeted on Sunday evening that no arrests had been made at the Cardiff City Stadium.

The tweet read: "No arrests at the Cardiff City Stadium today. Great to see both sets of fans being passionate & well-behaved".

During the game there were few controversial incidents until Swansea City goalkeeper Michel Vorm brought down Cardiff substitute Fraizer Campbell, earning him a red card and a

Manager Michael Laudrup had already used all three substitutes so defender Angel Rangel ended up taking the gloves for the last few moments.