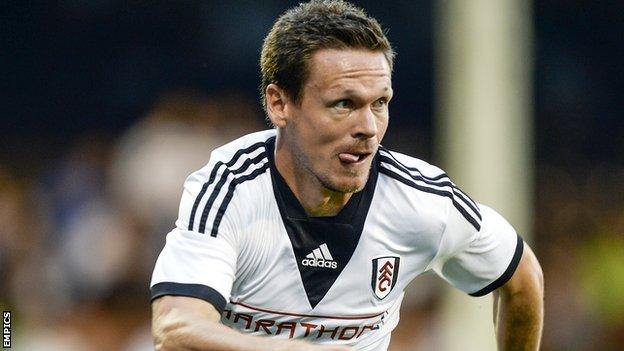 Fulham defender Sascha Riether has been banned for three matches after admitting a Football Association charge of violent conduct for stamping on Manchester United's Adnan Januzaj.

The incident occurred in stoppage-time of Fulham's 3-1 Premier League defeat by United on 2 November.

The stamp was not seen by match officials but was caught on video.

Riether, 30, will miss Fulham's Premier League match with Liverpool at Anfield on 9 November, the home fixture against Swansea City on 23 November and the trip to West Ham on 30 November.

"I want to say I am sorry to Adnan Januzaj," said Riether. "It was very unlike me and I can only say that frustration got the better of me.

"I also want to apologise to my team-mates, fans and everyone at the club for the ban incurred following Saturday's match.

"I will accept the consequences of my actions, and hope to put it behind me when I return."

"For an FA charge to follow, all three panel members must agree it is a sending-off offence," the FA said. "In this instance, the panel were of the unanimous decision that it was an act of violent conduct."

Speaking before being made aware of the FA charge, Manchester United manager David Moyes called for more protection for his 18-year-old winger.

He said: "It is a bad stamp and it does look deliberate.

"I do think Adnan is going to need a little bit of protection or we are going to find that he is getting kicked up and down."