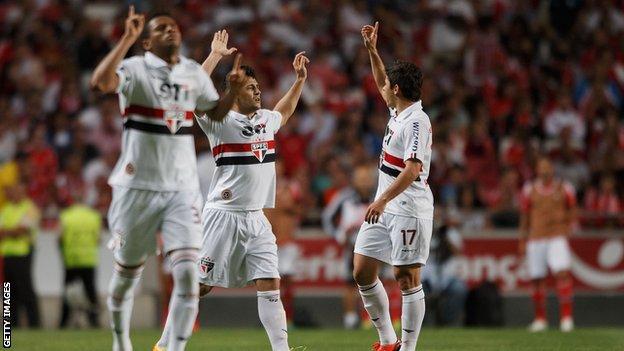 How can the prestige and profile of the Europa League be raised? A second cup competition always has the problem of being in the shadow of the first, like a consolation prize for those who have missed out on the main event.

There is, though, a relatively simple means of improving things; use the prestige of the leading cup competition to help pull along the second. The winners of the 2014-15 Europa League will automatically qualify for the Champions League, giving clubs a powerful incentive to take the competition seriously and field their strongest sides.

This is a case of Europe learning from the South American experience. The main event on this side of the Atlantic is the Copa Libertadores, contested since 1960, and started with the original aim of crowning a champion of the continent to take on the winners of the old European Cup. All over South America there are terrace chants about the Libertadores.

No-one sings about the second competition, the Copa Sudamericana (or Sul-Americana in Portuguese-speaking Brazil). Brought into life in 2002 following the collapse of a previous tournament, the Sudamericana lags far, far behind the Libertadores in terms of prestige and quality. It is done on the cheap - there are no group stages, travel costs are reduced in the early rounds by having games between clubs from neighbouring countries, and it is weighted towards Brazil and Argentina.

But as it rolls along it is picking up a bit more credibility. In the early years the Buenos Aires giants River Plate and Boca Juniors received invitations to take part. This no longer happens - participation is now on merit, though the continent's 10 nations are free to devise their own entry criteria. And, for the last three years, the winners have been awarded a place in the Copa Libertadores - the very principle that Europe is now preparing to implement.

That is certainly a powerful incentive for Sao Paulo of Brazil. One of the country's giants, they were expected to be among the contenders for the domestic league title. The squad would certainly seem strong enough, with veteran goalscoring goalkeeper Rogerio Ceni, one-time World Cup-winning centre-back Lucio, ex-Arsenal midfielder Denilson, international playmakers Jadson and Paulo Henrique Ganso and former Brazil striker Luis Fabiano.

But their campaign was undermined by off-field political disputes and problems in the dressing room. Two coaches came and went, Lucio was sent to train alone and the club were at one point deep in relegation danger.

The return of coach Muricy Ramalho - who won three consecutive league titles with Sao Paulo between 2006 and 2008 - has not only steadied the ship, but given the club an outside chance of a top-four finish and a place in next year's Libertadores - the bare minimum objective when the season started. With six rounds of the league to play, Sao Paulo are seven points behind the team in fourth place - a difficult margin to make up, but not impossible.

An easier path to the Libertadores, though, is for Sao Paulo to repeat last year's achievement and win the Copa Sudamericana. On Wednesday they will book their place in the semi finals if they can successfully defend their 3-2 first-leg lead when they travel to Colombia to take on Atletico Nacional of Medellin.

But this is no foregone conclusion. Colombian champions Nacional are one of the continent's in-form sides. Coach Juan Carlos Osorio may bear a passing resemblance to Stan Laurel, but facing his team is no laughing matter. Indeed, many of Nacional's opponents have found themselves in a fine mess as they try to cope with a combination of traditional Colombian interplay and European dynamism and directness.

The latter is not a co-incidence. Osorio was once on the coaching staff at Manchester City, and there is a clear European influence in some of the things that he does; in the importance he places on the quick transition between defence and attack, for example, and in the way he rotates his squad in an attempt to keep everyone fresh. And he throws in some of his own idiosyncratic methods, such as scrawling little messages on pieces of paper which are then ferried out to the team captain.

Sao Paulo and Atletico Nacional produced a gripping first leg in Brazil last week. The hosts, well on top in the early stages, gifted Nacional an equaliser a few minutes before the break. The Colombians shaded the second half and deserved their next equaliser, only to concede in the final minute when, for the second time in 20 minutes, they defended poorly at a corner.

The five goals aside, it was a fine game between two sides proficient at circulating the ball with patience - and it whets the appetite for a second leg that promises to contain both drama and quality.

And surely, whatever the competition, this game ticks the boxes for gaining global attention - two well-matched, attractive, in-form sides meet with a semi-final place at stake. Whether that happens in the Champions League, Europa League, Libertadores or Copa Sudamericana, it is the stuff that spectacle is made of.

What lessons can Africa learn from South American football, looking at the star players it produces in Europe? Joel Kasoka

Ensure that the starting point of the process is your own footballing identity. Rather than set out to produce what the Europeans think they want (ie big, strong players), instead make them want what you have got (or could have) - the kind of creative, imaginative talent that can be guided, but can't be produced by coaching alone.

Have there been any standout South American players at the U17 World Cup - a future Suarez, Messi or Neymar perhaps? Daniel McMullin

Argentina - historically not very strong at the level - are the only South American team still standing as the competition moves into the semi-finals. But I have to be honest, I've seen very little of it. I concentrate a lot on the U20 level, but experience has led me to believe that U17 is so early that in most cases it is too soon to tell how the player is going to develop - which can work both ways. I've seen some wonderful U17 prospects who have never kicked on, while also recalling that Neymar was a resounding flop in the World Cup at this level four years ago.