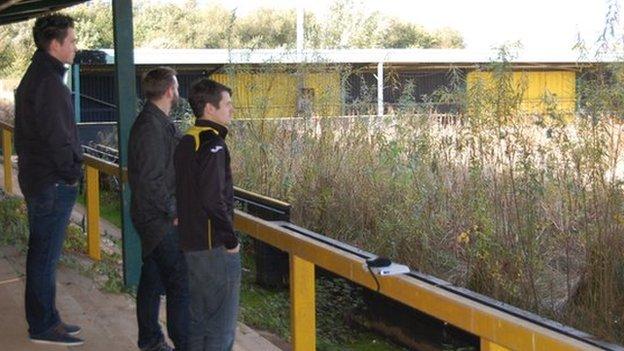 It has been 2,384 days since Gloucester City last played a competitive game at home.

The yellow and black painted walls still mark out the Tigers' territory at Meadow Park, their residence since 1986.

But inside the ground, it is like the ghost of football past.

"When you see it in this state it brings a lump to my throat," supporters' trust chairman Lee Mills told BBC Sport.

It is the first time Mills has stepped foot in his club's home since it was devastated by a third major flood in 17 years, in the so-called summer of 2007.

The grass on the pitch is eight feet tall and littered with rogue trees and recycling bins. Seats have been ripped up, the roofs of the dugouts have caved in.

The directors' box - supposedly the best view in the house - is surrounded by smashed glass, and a dishevelled mattress suggests that the space has become shelter for someone who, like the club, is homeless.

"It still looks so familiar," Mills added, standing in his beloved T-end stand. "The paint on the far side I remember vividly. I painted that on a Sunday afternoon. We were so proud of our stadium."

When the River Severn burst its banks after three days of torrential July rain and spilled into Meadow Park, the water reached the top of the crossbar of the goalposts - that image, captured by fan Neil Phelps, became synonymous to the situation.

The deluge eventually subsided, but it left a trail of destruction.

And after six years of setbacks, the Conference North club have no 'home' to host League Two Fleetwood in the FA Cup on Saturday.

Instead, they will once again travel 12 miles to their temporary base at Cheltenham Town for their first round tie.

"The fans do their best," said life-long supporter Matt Yates of their attempts to make Whaddon Road feel like home. "We put our flags on the seats to hide some of the red."

And Mills admitted: "We've got used to the nomadic lifestyle. If we had a home ground tomorrow I don't think a lot of us would know how to run it."

Last year, there was genuine hope among fans that after five years on the road - first at Forest Green before Cirencester then Cheltenham - Gloucester were on their way home.

With the financial backing of owner Eamonn McGurk, the board had worked for three years on the perfect plan to build a brand new ground, within the original boundaries, which included flood defences and substantial business development in the area.

But in September 2012, they received the news that Gloucester City Council could not approve the plans without more detailed flood risk assessments - which would cost up to £100,000.

It put them back to square one and financial problems started to escalate.

With less people willing to travel to a 'home' game, little money was coming in. In one game, against Droylsden, only 142 supporters turned up, meaning the Tigers were left with £21 profit.

Last season ended with players deferring their wages and with Gloucester struggling to pay rent.

"I used to have dark hair when I started. Now it's grey and falling out," said chairman Nigel Hughes, only half-joking.

Finances are now balanced, albeit precariously, and scaled-down plans for the stadium have been drawn up ready for submission.

Hughes confirmed the troublesome flood assessments will be handed to the Environment Agency in the next four to six weeks, and then the club will again have to wait to see if the plans are finally approved.

"We need it before the new year to give everyone a boost," he continued.

"I'm reconciled to playing in Cheltenham for the next 18 months but if we got the decisions through by the end of the year, we could really address it then.

"We've experienced some strange decisions in the past and I can't say 100% that we're going to get everything signed off, but my gut feeling is that we will."

But gut feelings may not be enough for some fans. They want a definitive action plan.

"The fact we're not even close to being back here is so depressing," said Matt Phillips, who joins Mills and Yates in the supporters' trust.

"In my mind, the best route home is the quickest route home. It's time the focus is shifted a little bit on to the people who are responsible for us being away from Gloucester."

As a supporter himself, Hughes empathises with the people in the stands. But as the voice of the people in charge, he insists they are doing all they can.

"There's been some people on the outside who have been happy to knock the efforts of those who have tried hardest to sort this," he said.

"It's very easy to spend other people's money and talk about how it should be done. There's been a lot of money invested to keep us at this level.

"Hindsight is a wonderful thing. Knowing what we know now we would have done things differently. However, we can't go back. We are where we are and we have to focus on the positive news that will hopefully come forward."

With all the hoopla of the stadium, it is easy to forget Gloucester's achievements on the pitch.

The Tigers won promotion from the Southern League in 2008-09 and this is the second consecutive season they have reached the money-spinning FA Cup first round.

They have already earned £24,000 from their run in the qualifiers and are set to pocket a further £6,750 from TV highlights of their game with former non-league rivals Fleetwood.

The money they have already earned from their cup run alone would virtually pay the rent at Cheltenham for another year.

But without a firm resolution to their future, some are struggling to take the positives.

"This season has been the worst since going away. I'm a patient person but after six years of waiting around I'm getting frustrated. We want a spade in the ground," said Yates.

"I was brought here by my parents. That's what we are missing now. We are missing a whole generation of kids.

"Something needs to happen soon otherwise I fear we will lose the club. And what are we going to do on a Saturday afternoon if there's no football to watch?"