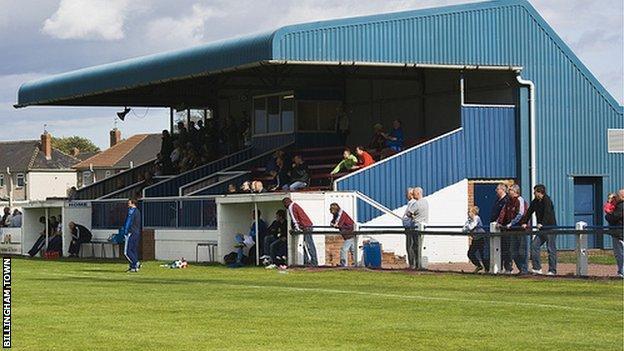 A non-league side were thrashed 14-0 after fielding just seven players - two of whom were injured.

Billingham Town played with the minimum-allowed number in order to avoid a fine for forfeiting the match against Stockton Town in the Durham Challenge Cup.

They were also without a manager after Paul Burton's resignation.

"We apologised to Stockton and just took what we knew would be a very heavy defeat," chairman Glenn Youngman said.

Billingham, who are four steps below the Conference Premier, suffered the defeat on Saturday. One of the injured players had to go in goal.

Billingham in the football ladder

This term they are second-bottom with a goal difference of -53 having lost 16 of 17 matches.

They are the first club of former Manchester United defender Gary Pallister.

Former manager Burton resigned after last Wednesday's defeat at Guisborough Town and several of the players told the chairman they were not willing to play for the club any longer.

"I texted 22 players on Thursday and seven said they were unavailable," Youngman told BBC Sport.

"Four had fair excuses but three just asked for transfers. Those three, along with the ones who didn't reply, have let their team-mates down and will be shipped out."

New boss Wilf Constantine was unable to start his new job at Billingham, who play in Northern Football League Division One, until this week.

A team must field a minimum of seven players in order for a match to go ahead, with a fine the penalty for having to forfeit a game - and Youngman was grateful to those who did play.

"Full credit to the lads who did turn up because we very nearly had to forfeit. Then we would probably have been banned from next year's competition and been hit with a huge fine."