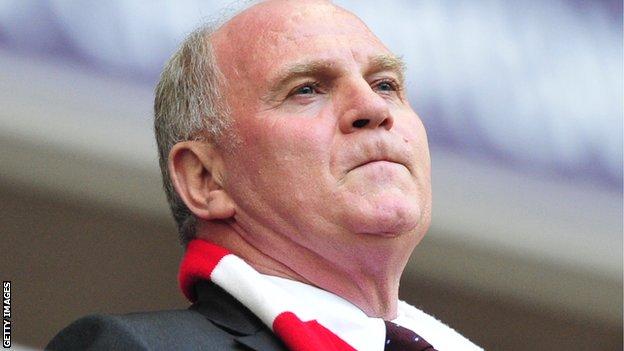 The ex-West Germany striker, who played for Bayern in the 1970s before moving into the boardroom, reported himself to the authorities earlier this year over an undeclared Swiss bank account.

German prosecutors charged the 61-year-old in July after a lengthy inquiry.

Munich's state court said that judges have decided to send him to trial with proceedings starting on 10 March.

Hoeness, who spent 30 years as Bayern's general manager before being elected as president in 2009, will remain in his role while the case continues.

"The board is of the unanimous opinion that Uli Hoeness shall remain in his position even with a trial being set," Bayern said in a statement.

The Bundesliga club are the current German and European champions and won last season's German Cup to clinch an unprecedented treble.

Hoeness made over 200 top-flight appearances for Bayern - and helped them to three European Cup titles - between 1970 and 1979.

He was also a World Cup and European Championship winner with West Germany before he retired from playing following a serious knee injury.