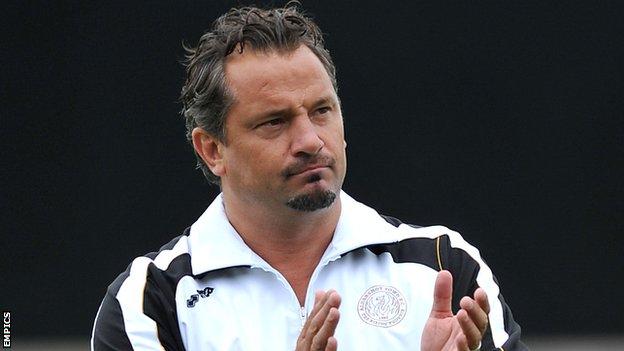 The former Wimbledon and Bolton striker has reached a settlement over his contract and "agreed to stand down" after five months in charge.

Holdsworth, sacked by Aldershot in February, lost eight of his last 11 league games in charge.

And the Clarets lie 17th in the table with just four wins from 13 this term.

Holdsworth said: "With the amount of change in personnel during the summer due to significant budget constraints on the club, we have had to make many changes.

"We have all tried to maintain a high level of professional standards on and off the pitch. This has been difficult on everyone.

"We knew it would take time and results would be affected but as the club want to make more financial cutbacks as stated in the past few weeks, I'm very disappointed that we haven't been able to complete the challenge on and off the pitch."

Assistant manager Kenny Brown will take caretaker charge of the side, while Holdsworth's son Jordan, a striker at Melbourne Stadium, has also left the club.