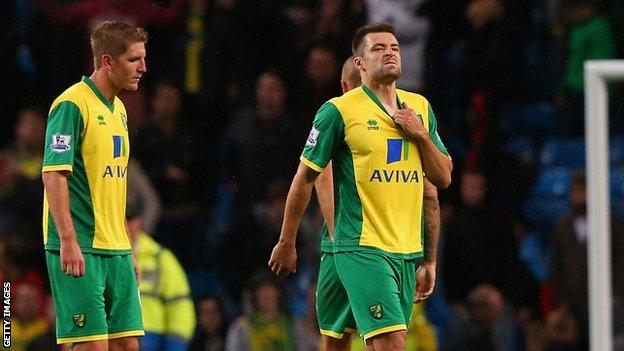 The defeat left Norwich 18th in the table and Martin told BBC Radio Norfolk: "We're all behind the gaffer. That still remains the same.

"We've not been good enough. He'll get a lot of stick for that and so will we.

"It's up to us to take some responsibility and accountability for what's gone wrong."

"We don't know what's going on behind the scenes but you would like to think the manager will be given the opportunity to get those players to play to the best of their ability.

"But it has to happen sooner rather later.

"The manager is a fighter. He's not going to throw the towel in.

"The players have got to look after themselves as a stock, they can't afford to put in bad performances because each player is playing for their livelihood."

Pressure is mounting on Hughton, with his side registering just two Premier League wins this season and scoring six goals - one less than Manchester City managed in one game against the Canaries.

Martin, 27, added: "We're humiliated. What is there to say about that performance?

"You can say what you like about tactics and how you prepare, but the bottom line is, with the exception of [keeper] John Ruddy, because he made some good saves, it was nowhere near good enough."

Norwich had put in heartening performances in defeats by Arsenal and Chelsea last month - but the capitulation against City means Hughton's side have now conceded 18 goals in their last four top-flight games.

And attention turns to Saturday's visit of West Ham, as the Canaries look to climb out of the relegation zone.

"I'm sure we're going to take [criticism] all week until the next game," said Martin.

"When we win we deserve the praise and by the same token after that we deserve what we get from the media, fans and ultimately ourselves. We are embarrassed and hurt."