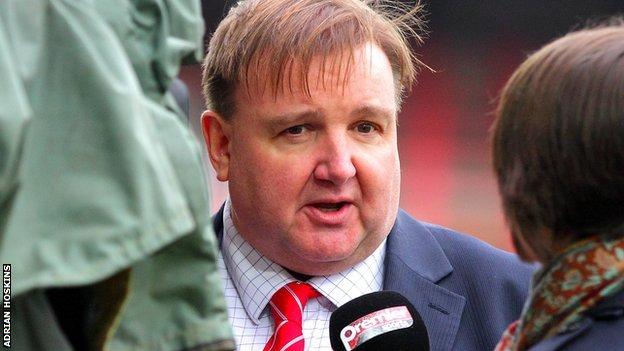 Kidderminster Harriers chairman Mark Serrell says they have no "financial issues" that might have had any bearing on manager Steve Burr's possible exit.

But Serrell told BBC Hereford & Worcester: "There are no financial issues at Kidderminster Harriers.

"It's the rumour mill. And I'd like to put all that to bed."

"And we haven't got a corporate box available for the whole season. Every one has sold.

"Three years ago, we were in a very difficult situation, hours from administration.

"But, as long as I'm involved, we will not make any decisions that put the club at risk.

"Kidderminster Harriers are bigger than Steve Burr, bigger than any of the players and bigger than me and the board. We will always put the club first."

Serrell, who became Harriers chairman in January 2011, a year after Burr's arrival, added: "We've had more than one approach for Steve in the past.

"It was always our intention to speak to him openly. We again did so in this case and I'd have liked him to turn the offer down.

"People have asked if we allowed Steve to talk to Forest Green because the club needed the compensation, but that is not the case.

"The decision that has been taken has been by Steve Burr, not by the football club.

"But as soon as this is all sorted out now the better."

Despite Saturday's first defeat in seven league matches, Burr's Harriers, runners-up in April, are again well on course for a tilt at automatic promotion, remaining in second place - six points adrift of Conference Premier leaders Cambridge United, who they are yet to play.