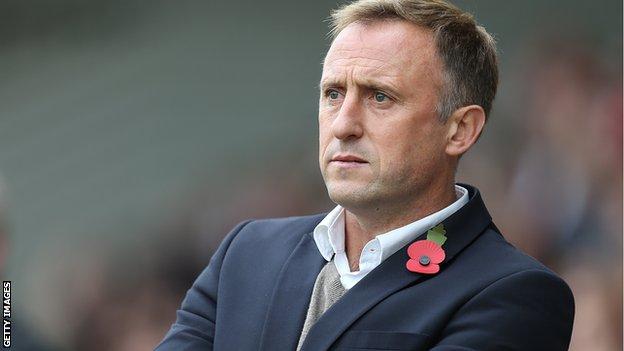 Cheltenham Town boss Mark Yates says he is "sick" of seeing his side make defensive errors.

The Robins twice held the lead against York on Saturday.

But a mix-up between defender Sido Jombati and keeper Scott Brown led to Ryan Bowman grabbing the visitors' second as the game ended 2-2.

"We're all just sick of somebody coming in at the end of the game saying 'sorry' for something," Yates told BBC Radio Gloucestershire.

"They're not doing their jobs properly for 90 minutes. It's cost us four points in the last two games.

"The league is so tight we can be where we want to be, but we've got to be more consistent and stop conceding goals like we are."

Following the draw against the Minstermen, Cheltenham are six points clear of the relegation zone in 18th place in League Two.

And Yates felt that York's first goal proved to be a crucial turning point in the match on Saturday.

"Goals against take the wind out of your sails and I felt that happened," he said.

"Both goals were disappointing - the first one even more so because we were playing alright and we were on top.

"We then completely switched off from a set piece which is a cardinal sin.

"The mix-up at the back for their second goal was just calamitous and it's ended up costing us.

"We don't blame players individually, but we take responsibility together."