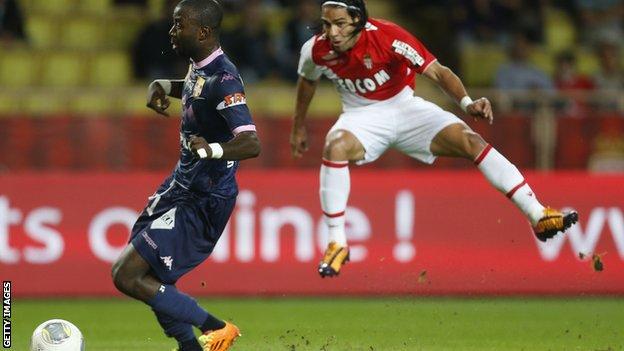 Radamel Falcao scored his ninth league goal of the season but Monaco could only draw at home to Evian.

The Colombian striker fired into the bottom corner midway through the first half after being picked out by James Rodriguez.

Daniel Wass had put Evian ahead with a fine finish on the half-volley.

Modou Sougou twice had good chances in the second half to win the game for Evian, while Lucas Ocampos hit the bar late on for Monaco.

The draw means Monaco have 26 points but remain third behind Lille on goal difference.

They are two points behind leaders Paris St-Germain, who have a game in hand and host Nice on Saturday.

After winning seven of their first 10 games, Monaco have now failed to win their last two after losing to Lille last Sunday.

Eager to get back to winning ways after that defeat, Monaco were the better side in the opening stages against Evian, who started the day 16th in the table.

Yannick Ferreira-Carrasco and Falcao both went close but Evian took the lead against the run of play when a long ball found Wass on the edge of the area and the defender struck a powerful drive beyond Monaco keeper Danijel Subasic.

Monaco levelled seven minutes later when Falcao collected a smart pass from Rodriguez some 20 yards from goal and the striker drilled a shot just inside the post.

The home side deserved to be level at half time but Evian had a number of golden chances to win the game in the second half.

Sougou was denied by Subasic when he raced through on goal, before the Senegalese winger blazed a shot over the bar from a promising position.

Monaco could have snatched victory minutes before full time but Ocampos struck the bar from the edge of the area.