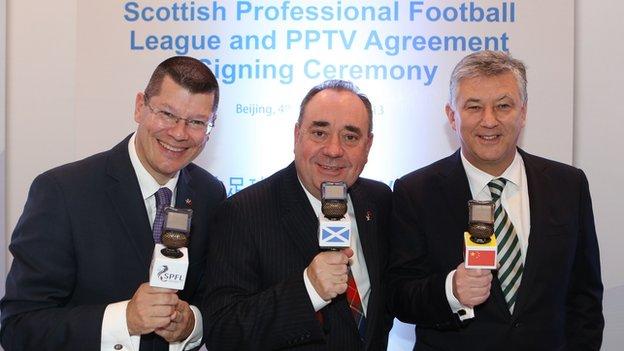 Scottish football will be broadcast live in China for the first time after a contract was agreed with an online streaming provider.

The deal, struck by the Scottish Professional Football League, covers the screening of 58 SPFL matches through PPLive TV.

The SPFL is made up of clubs in the Scottish Premiership, Championship, League One and League Two.

Salmond, in Beijing for the announcement, was joined by SPFL chief executive Neil Doncaster and clubs' representative Peter Lawwell, the Celtic chief executive.

We want to build on this opportunity, not only in China but across other global markets

The agreement will result in SPFL fixtures being broadcast alongside Premier League games from England and Spanish top-flight matches to up to 60 million PPLive TV users in China.

"There is clearly a growing appetite for European football coverage in China and now football fans across this country will be able to enjoy the action from iconic Scottish footballing venues such as Easter Road, Fir Park and Pittodrie," said Salmond.

Doncaster described the deal as "a brilliant result for Scottish football".

"We want to build on this opportunity, not only in China but across other significant global markets and discussions with several potential partners are ongoing," he added.

Speaking on behalf of SPFL clubs, Lawwell said the deal demonstrated their ambition, adding: "The English Premier League experience shows that giving overseas audiences the chance to watch games week-in, week-out is the key to building an international fan base."

The SPFL has yet to find a main commercial backer after Clydesdale Bank's sponsorship of the top flight ended in the summer.