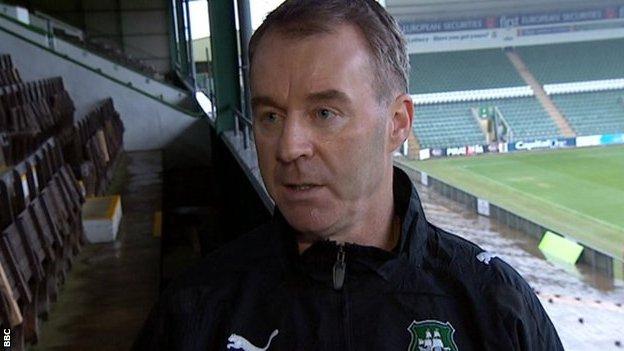 Plymouth boss John Sheridan credited his players' character after the 1-0 victory over Northampton gave his side a second win in a row.

Lewis Alessandra struck in the 90th minute to ensure the Pilgrims followed up last week's victory over Mansfield with another last-gasp win.

"I'm really pleased for the players, there was a will to win and to grind it out," he told BBC Radio Devon.

"They went to the final minute and have done that in the last two games."

Argyle had been on a run of eight games without a win before the Mansfield game, but the recent upturn in the side's fortunes has relieved the pressure on Sheridan.

"I wouldn't care if they're all scrappy results as long as we're winning games, but I thought we played well," added Sheridan.

"We're just getting on a bit of a run, which we haven't done yet this season. Clean sheets are a good habit but our problem has been scoring goals and the pleasing thing is we could have scored three or four goals.

"We'll just keep trying to improve and work as hard as we can. This league is a funny division - the teams are very evenly matched from top to bottom and if we can carry on picking up points then we might just get in the mix."

The former Chesterfield and Oldham boss said his side had taken another step forward in terms of their performance against Northampton.

"I thought we played a lot better [than against Mansfield]," he said.

I think it enables us to get a few more bodies forward more than anything. The lads have worked very hard on the system

"Throughout the game the players gave us 100% and that's all you can ask for - the pleasing thing is we created a lot more chances at home.

"I definitely think we got what we deserved. We created a lot of chances and played well - we were on the front foot for most of the game, and if you do that then hopefully you'll get what you deserve."

Alessandra's goal came courtesy of an excellent pass from substitute Luke Young, which was helped on by a deft touch from striker Reuben Reid.

"The goal was an excellent move," he said. "Luke came on and I like my subs to come on and change the game.

As well as a second straight win, the match saw Argyle record their third clean sheet in a row. Sheridan has switched to a 3-5-2 formation in recent games, and said that he thought the system suited his players.

"I think it enables us to get a few more bodies forward more than anything," he added.

"The lads have worked very hard on the system. Jamie Reckord was a bit raw with it but he's getting used to it now."