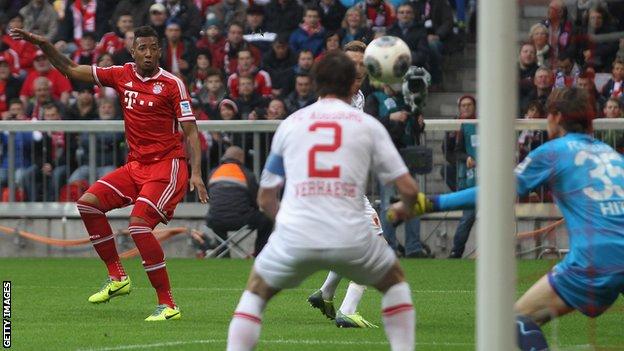 Franck Ribery added a second just before the break with a free-kick.

Jan Moravek shot wide for FC Augsburg after half-time but Bayern completed victory with a late third, Thomas Muller scoring from the spot.

The win, coupled with Borussia Dortmund's defeat by Wolfsburg, means Bayern extend their lead at the top of the table to four points.

Bayern have won 10 games and drawn two so far this season under Pep Guardiola, who inherited a 25-game unbeaten streak from his predecessor Jupp Heynckes.

Guardiola, who was appointed in June, has enjoyed the best start to a season by a new Bundesliga coach in the league's history.

Bayern started Saturday having already equalled the longest unbeaten run in the Bundesliga, set by Hamburger SV in 1982-83.

It took just four minutes for Bayern to put themselves firmly on course to break the record when the unmarked Boateng turned inside the area before smashing a powerful rising effort into the roof of the net.

FC Augsburg were struggling to deal with Bayern's attacking strength as David Alaba sent a free-kick just over the bar before a Dante effort was saved by away keeper Marwin Hitz.

France winger Ribery made it 2-0 just before the break when he smashed home a direct free-kick.

The visitors rarely threatened but they should have done better with the few chances they had. Andre Hahn fired wide from inside the area while Tobias Werner sent an effort high over the goal.

Instead, it was Bayern who looked most likely to add to their lead. Robben's shot from Alaba's ball was kept out by Hitz, before Ribery had an effort blocked from a good position.

A third goal arrived in the fifth minute of injury time when Mueller netted a penalty after Hong Jeong-ho handled inside the area.

"The record is unbelievable, it's not easy to go 37 games without defeat. Congratulations to the club.

"I have noticed that every game is a lesson for me in understanding my team."