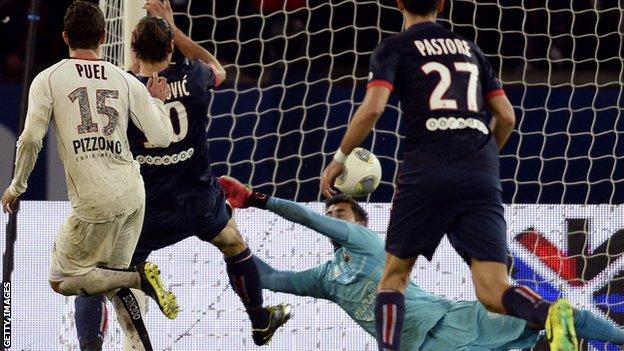 Zlatan Ibrahimovic scored a hat-trick as leaders Paris St-Germain beat Nice 3-1 to strengthen their grip at the top of the Ligue 1 table.

The 32-year-old Sweden forward opened the scoring when he turned in a cross by Gregory Van der Wiel before doubling the lead from the penalty spot.

But Ibrahimovic's eighth league goal of the season - a header from Lucas's cross - secured victory.

The former Juventus and Barcelona forward is in fine form as he prepares to face Cristiano Ronaldo, who also scored a hat-trick for Real Madrid, when Sweden meet Portugal in the first leg of a World Cup qualifying play off on 15 November.

The result lifted PSG five points clear of both Lille, who are in action against Guingamp later on Saturday, and Monaco at the top of the table.