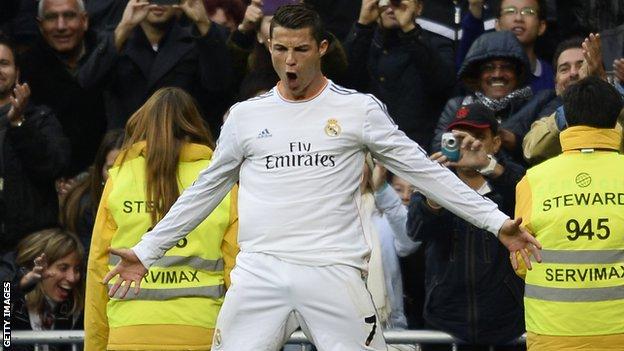 Ronaldo opened the scoring early with an angled finish before setting up striker Karim Benzema for the second.

The Portuguese forward's penalty put the game beyond the visitors and Gareth Bale fed Sami Khedira for the fourth.

Antoine Griezmann pulled one back with a rising finish but a Ronaldo free-kick wrapped up the win and his hat-trick.

Carlo Ancelotti's side have scored 15 goals in the last three league games, with Ronaldo scoring eight of them.

The 28-year-old former Manchester United player now has 27 goals in 19 appearances for club and country this season, including four hat-tricks.

It was the perfect warm-up for his showdown with Zlatan Ibrahimovic, who also scored a hat-trick for Paris St-Germain, when Portugal face Sweden in a World Cup qualifying play-off, the first leg taking place in Portugal on 15 November.

Ronaldo was unlucky not to open the scoring in the seventh minute when his 25-yard effort hit the bar.

But he did not have to wait long to celebrate as he pulled down Benzema's deep cross before drilling past goalkeeper Claudio Bravo from a tight angle after 12 minutes.

Ronaldo then returned the favour six minutes later with a pull-back that the France international side-footed past Bravo to make it 2-0.

It was 3-0 after 26 minutes, Ronaldo winning a penalty when his low shot went through Markel Bergara's legs and hit the defender's trailing arm.

It was tough on Bergara but Ronaldo was not about to waste the chance as he fired home his second from the spot.

The game was as good as over for Sociedad at that point, but the agony was not and Bale set up Khedira to rifle home Madrid's fourth from the edge of the box with nine minutes of the first half remaining.

Madrid continued to push for more goals but it was the visitors who netted next when Griezmann neatly lobbed home a through-ball from Carlos Vela after 61 minutes.

That was as good as it got for Sociedad though, and Ronaldo completed the scoring - and yet another hat-trick - with a 25-yard free-kick with 14 minutes left.

The win closed the gap on Barcelona but the league leaders visit struggling Real Betis on Sunday.