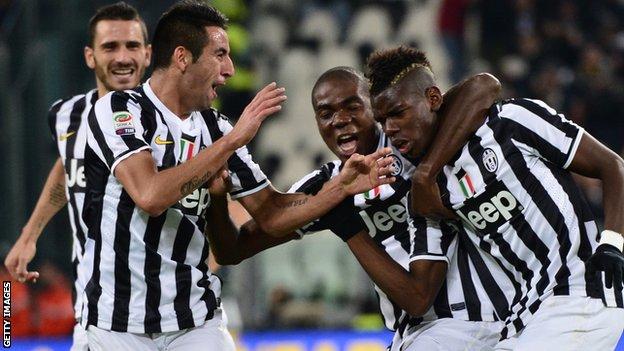 Juventus moved up to second in Serie A and within a point of leaders Roma with victory at home to Napoli.

The visitors had started the day in second but were behind after just two minutes through Fernando Llorente's header.

Angelo Ogbonna was sent off for Juventus late on when he was shown his second yellow for a reckless challenge.

It was a dominant display from the defending champions, who have now won 10 of their 12 league games this season.

Juventus on the charge

Juventus are not only looking to defend the Serie A league title, but also win their third in succession and their 30th top-flight championship

Further good news for the Turin side was that leaders Roma could only draw against Sassuolo earlier on Sunday. They have now picked up just two points from their last two games.

Roma's defeat meant both Juventus and Napoli knew victory would be a real boost to their title ambitions.

But the visitors' hopes were dashed two minutes in when Llorente tapped in after good work by Carlos Tevez.

Napoli were struggling to find their rhythm and barely threatened the hosts - a fact highlighted by the half-time statistics which showed they had only managed one shot on target.

It was their goalkeeper Pepe Reina who prevented Juventus from taking a bigger lead into the break, as he kept out efforts from Tevez and Llorente.

Napoli improved slightly after the restart and forced home keeper Gianluigi Buffon into his first real save when he palmed away Lorenzo Insigne's curled free-kick.

Reina again kept out Juventus as he first denied Arturo Vidal with a shot from distance before stopping Tevez's follow up.

But there was nothing he could do when Juventus doubled their advantage with 16 minutes remaining.

Napoli gave away a free-kick 25 yards from goal and Pirlo stepped up to curl a trademark set-piece superbly over the wall and beyond the dive of Reina.

Minutes later an equally stunning goal wrapped up the win as Pogba flicked a square pass into the air before volleying into the back of the net.

Defender Ogbonna took some of the shine off the win when he was shown a second yellow card for a needless foul in the closing stages.