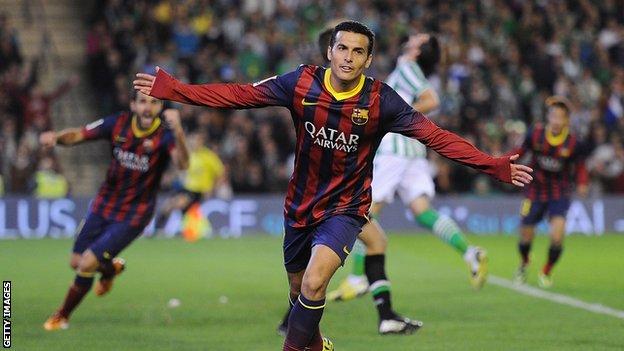 Barcelona overcame a worrying injury to Lionel Messi to coast to victory at Real Betis and open up a three point lead at the top of La Liga.

Messi limped off with a leg injury when the game was goalless before Neymar side footed Barca ahead after a low Cesc Fabregas cross.

Pedro's curling shot made it 2-0 before Fabregas finished off a fine team move.

Fabregas headed his side's fourth before Jorge Molina scored for Betis from the penalty spot.

Barcelona have scored four goals or more in five of their 13 La Liga games this season.

It was too easy for the La Liga champions at times as bottom of the table Betis contributed to their own downfall with some poor defending.

With nearest challengers Atletico Madrid held 1-1 by Villarreal earlier in the day, Barca knew that victory at the Benito Villamarin would send them clear at the top.

There was no looking back once Neymar broke the deadlock 10 minutes before the interval from close range.

Betis, who were denied the lead when Victor Valdes produced an excellent stop to keep out Juan Carlos, capitulated.

Within 90 seconds it was 2-0 as Pedro's strong run and fine curling finish doubled Barca's lead.

Their 12th win in 13 league games this season was confirmed when Fabregas finished a free-flowing move which sliced the Betis defence wide open in the 63rd minute.

And the former Arsenal player doubled his domestic goal tally for the season with a header which went in off the post 11 minutes from time.

Betis scored a consolation from the penalty spot in stoppage time through Molina after Dani Alves hauled down Javier Matilla.

The loss of Messi will rightly be a concern for Barca manager Gerardo Martino.

But the 22-times champions of Spain showed they can cope without their influential goalscorer.