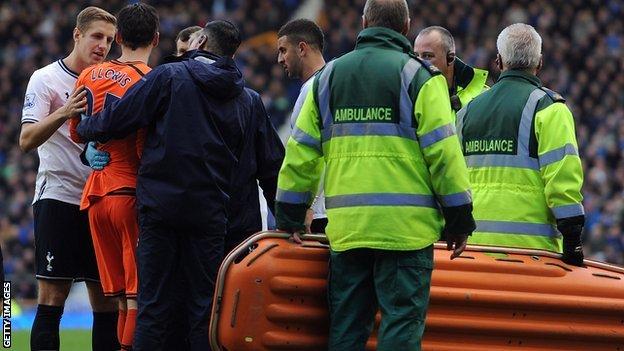 Footballers should be removed from play if they lose consciousness, say the world players' union Fifpro and the Professional Footballers' Association.

Tottenham keeper Hugo Lloris was allowed to carry on after being knocked out in Sunday's 0-0 draw with Everton.

"If anyone suffers severe trauma to the head and loses consciousness, they should be required to leave the field," said the PFA's John Bramall.

All clubs shall ensure that any player having left the field of play with a head injury shall not be allowed to resume playing or training without the clearance of a qualified medical practitioner. The same provision shall apply where a head injury is sustained in training.

The Football Association says a player can continue if assessed by a doctor.

Lloris briefly lost consciousness after colliding with striker Romelu Lukaku late on in the match at Goodison Park and was assessed on the pitch before continuing.

"Fifpro condemns that the health and safety of players are left to coaches, trainers or even to players themselves.

"Medical professionals should be aware of any relevant medical guidelines and apply them in order to empower the health and safety on the field."

Fifpro urged all clubs to follow guidelines laid out by sport medicine groups in Zurich last year, which called for the removal of a player from the field if they were showing a loss of consciousness.

"The decision was not right," added Dvorak.

"We have a very clear recommendation for doctors if concussion occurs or even if there is a strong suspicion of concussion then the player should be taken out of the play.

"This injury could have led to more severe complications."

Bramall added: "It is important to take the pressure off the players, club medical staff, and the manager - removing the need for them to make a very difficult decision.

"The PFA will continue to work with the stakeholders within the game, to evaluate what guidelines are currently in place and to see if and how they need to be improved."

In rugby union, Dr Barry O'Driscoll resigned from his role as medical advisor to the International Rugby Board in October following concerns about the treatment of concussion.