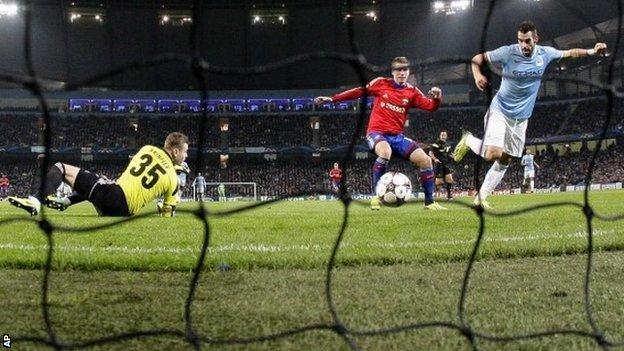 Sergio Aguero was the initial inspiration, scoring two and setting up another for Negredo as City scored three times inside the first half-hour to make it a straightforward night for Manuel Pellegrini's side.

Having already secured a victory in Moscow, City knew they would be able to progress into the last 16 at the third time of asking if they won again and Viktoria Plzen failed to beat holders Bayern Munich.

Aguero's early penalty was followed by a cool finish before a cross for strike partner Negredo effectively ended the contest.

Manchester City failed to win any of their home group games in last year's Champions League and lost to Bayern Munich last month, meaning this was their first home win in Europe since they beat the German side in December 2011.

Seydou Doumbia did pull a goal back for CSKA before the interval but the outstanding Samir Nasri set up Negredo's second just after half-time to restore City's three-goal advantage.

Doumbia beat City keeper Costel Pantilimon, once again chosen ahead of England keeper Joe Hart, from the spot for his second but City were never seriously under threat at any time as they cruised to victory.

It was fitting that Negredo, swiftly becoming a cult figure among City's fans and now dubbed "The Beast", had the final word when he completed his treble in the dying seconds with a header from substitute James Milner's cross.

City had the taste for goals again following Saturday's 7-0 win against Norwich City and they wasted no time in signalling their intentions against an uninspiring CSKA team.

The goals were flowing as early as the third minute when former Manchester United midfielder Zoran Tosic fouled David Silva, Aguero becoming City's highest scorer in European competition with 11 goals as he scored the penalty emphatically.

And the striker showed his quality again after 20 minutes, receiving Nasri's pass before turning and scoring with a precise finish.

Any notion of a CSKA comeback was banished as the Argentine then turned creator to set up the third for Negredo with a perfect low cross that left the Spaniard with a simple finish.

The Russians showed some signs of life on half-time when they opened up City through the middle and Doumbia rounded Pantilimon to score.

City, who replaced Fernandinho with Milner at half-time, responded six minutes after the restart when Yaya Toure's lofted pass into the area found Nasri, who unselfishly knocked the ball across the face of an open goal for Negredo to score with ease once again.

The only blot on City's display had been some defensive carelessness that might have received greater punishment against better opponents.

But as the result of the Plzen-Bayern game went their way, with the German side winning 1-0, Negredo rounded off a highly-satisfactory night for City when he headed in from Milner's delivery.

Check out the best goal celebrations and action shots from tonight's Champions League ties on the BBC Sport Facebook page.