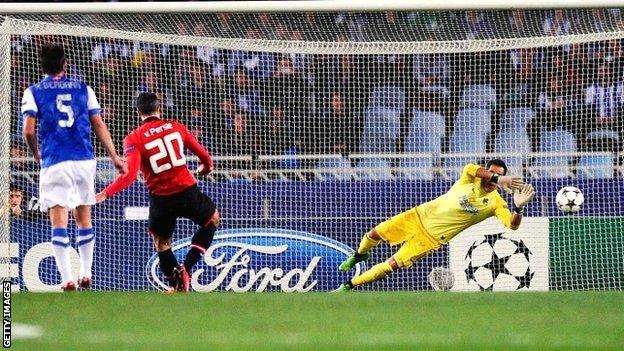 Manchester United remain top of their Champions League group, although Robin van Persie's missed penalty denied them an away victory against Real Sociedad.

After a poor first half, Javier Hernandez smashed over from six yards.

United improved after Van Persie came on and the Dutchman hit the post from Ashley Young's cross before striking the same upright from the spot.

Marouane Fellaini was then sent off late on as Real earned their first point in this season's competition.

United's Belgium midfielder received his second yellow card for a foul on David Zurutuza, having also been perhaps harshly booked in the first half for a challenge on Markel Bergara.

And it ended a frustrating night for United, who still have games against Bayer Leverkusen and Shakhtar Donetsk to come.

Having beaten their opponents by an Inigo Martinez own-goal in the previous fixture between the two teams a fortnight ago and Shakhtar Donetsk and Bayer Leverkusen also sharing a stalemate, David Moyes's side may yet rue this missed opportunity in their bid to reach the last 16.

They still remain top of the group, a point ahead of Leverkusen, and if they beat the German side in their next game on 27 November, United will progress.

Questions will be raised about the penalty as Young appeared to go to ground easily after a tug by Bergara right in front of referee Nicola Rizzoli, but the visitors had only themselves to blame after only clicking into gear in the final 30 minutes of the match.

That coincided with the introduction of Van Persie and Young after the hour mark, allowing Shinji Kagawa to move more centrally.

The Japanese international came closest to scoring in the first half as he fired wide from the edge of the box and had another effort saved by Real goalkeeper Claudio Bravo.

But although most of United's attacks came down their left, they were let down by carelessness in possession and as the half continued the hosts came back into the game.

Alberto de la Bella caused David De Gea a worry with a shot from 25 yards but that profligacy was nothing in comparison to Hernandez's miss after 50 minutes.

He somehow managed to scoop over from six yards following Kagawa's cross from the left, although it looked like the ball might have bobbled.

Van Persie and Young then came on to replace Hernandez and a quiet Wayne Rooney, and the duo transformed the game. Within a minute of the changes, Kagawa found Young, whose cross was smacked against the post by the Dutchman.

Van Persie, who is United's top scorer this season, then struck the same part of the goal from his penalty.

United almost paid for that as former Arsenal forward Carlos Vela nearly chested in Xabi Prieto's shot following a corner and when Fellaini was sent off in the 90th minute it soured a night where, at least, United took a point back to Manchester.