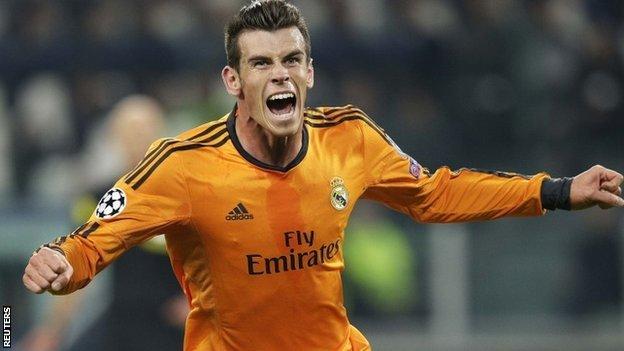 Gareth Bale scored his first Champions League goal for Real Madrid as they drew with Juventus to move closer to qualifying for the knockout stages.

But Fernando Llorente's stooping header secured a precious draw for the hosts.

Real Madrid need just a point from their final two group games to be sure of a place in the last 16, and a healthy goal difference may make even that unnecessary.

By contrast, Juventus may need to win both their remaining matches to ensure qualification after a slow start to their campaign in Group B.

Draws away to Copenhagen and at home to Galatasaray in their first two games, along with a 2-1 defeat in the reverse fixture in the Bernabeu, left the Bianconeri with no choice but to chase the game from the start.

Real Madrid initially revelled in the space that opened up with Ronaldo and Bale - two points of a three-pronged attack alongside Karim Benzema - both threatening on the break.

However, the industry of Paul Pogba and Carlos Tevez dragged the momentum the Italian side's way and after Iker Casillas had saved brilliantly from Claudio Marchisio's header, Pogba was felled in the box by an untidy challenge by fellow Frenchman Raphael Varane.

Vidal beat Casillas with a nerveless strike from the penalty spot and the home fans were bouncing in the stands as their side re-emerged for the second half.

The Welshman collected Ronaldo's square pass, bought himself a yard of space with a swift change of feet and sent a fierce, low shot inside Gianluigi Buffon's near post.

But Llorente, who moved to Juventus for free in the summer after a year spent running down his contract with Athletic Bilbao, exploited another error by Varane to equalise shortly after.

The French defender was caught ball-watching as Llorente spun away from him to meet Caceres's deep cross and keep Real waiting on their passage to the next round.

Shots on Target
Home12
Away4