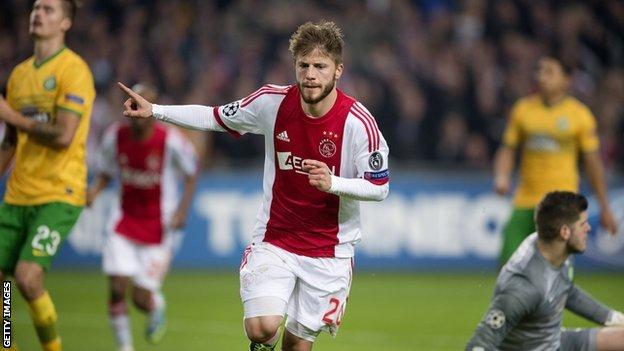 Celtic turned in their poorest Champions League performance of the campaign as they fell to a potentially damaging defeat in Amsterdam.

Lasse Schone's wonderfully-worked goal was enough to avenge the defeat the Dutch suffered at the hands of Neil Lennon's side in Glasgow.

Even if they beat Milan at home in their next game, they may need to take something from Barcelona to progress.

Celtic's display was all the more disappointing given the positivity with which they arrived in the Dutch capital.

But the thousands of travelling supporters were given little to cheer as their team barely threatened the Ajax goal.

The home side were on top throughout and the winning Ajax goal was befitting of any of the teams who have worn the famous red and white jerseys over the years.

A fabulous move of one-touch passing involving Schone, Davy Klaassen, Siem de Jong and Thulani Serero left the Celtic defence gaping in wonder as the Dane rounded it off by poking it cutely past goalkeeper Fraser Forster.

Schone - impressive throughout - almost curled in a second direct from a corner, only for Emilio Izaguirre to head off the line.

The tone was set by Celtic's first-half performance, which failed to reach the standards set previously in the Champions League, typified by defensive lapses and an inability to impose themselves in an attacking sense.

Despite that, Forster was called into serious action only twice.

Denswil tested him with an early 30-yard free kick, which was pushed behind by the keeper.

More impressively, he sprung to his right to tip De Jong's downward header round the post following a terrific cross by Ricardo van Rhijn.

Celtic failed to trouble Jasper Cillessen in the opening period, but should have done so just a minute before Schone struck for Ajax.

Beram Kayal was allowed to run from the halfway line as far as the edge of the Ajax penalty area, as Anthony Stokes's clever run dragged defenders away, but the midfielder's shot, under little pressure, flew wildly over.

That miss felt all the more painful as Schone made the breakthrough and though Stokes made Cillessen work shortly afterwards, the striker's effort from the left of the penalty area was comfortably held by the Dutch international.

On a bitterly disappointing evening for Celtic, only Forster and the immense Virgil van Dijk earned pass-marks and Neil Lennon will know much improvement is required if Champions League progress is to remain a reality.