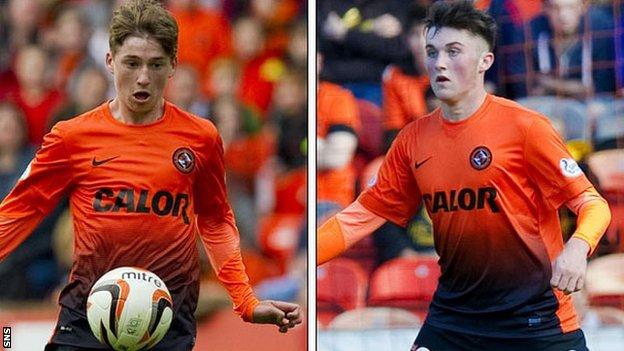 Ryan Gauld and John Souttar are two of four Dundee United youngsters to have signed contract extensions at the club.

Midfielder Gauld and centre-back Souttar, both 17 years old, have each extended their deals to May 2016.

United manager Jackie McNamara said: "These lads are a part of vibrant set-up we have in place and these contract extensions show our desire to continue to build in the correct manner."

Scotland Under-19 international Gauld made his Tangerines debut as a 16-year-old in May 2012 and has since scored four goals for the senior team, featuring 13 times so far this season.

Souttar, also a Scotland Under-19 player, made his Dundee United debut against Aberdeen in January and has gone on to be a mainstay in McNamara's defence.

Both Gauld and Souttar had previously been tied to the club until January 2016, but the latter was the subject of a £600,000 bid from Sunderland that was rejected by United.

"Ryan and John have shown they see their future at the club and indicated a determination to continue their football education at Tannadice," McNamara told Dundee United's official website.

"They have made great progression in their young careers so far and developing in the Scottish Premiership with United is the best option for that to continue."

"Darren and Euan have earned these extensions by showing the correct application and desire," McNamara added.

"I will be looking for both to push for more first-team squad opportunities as this season develops.

"These four lads demonstrate exactly what we are trying to achieve at Dundee United."