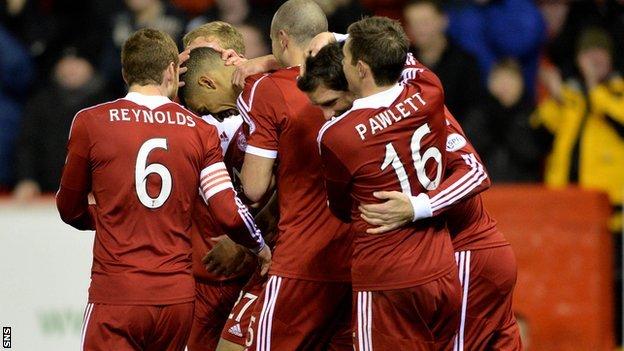 Aberdeen manager Derek McInnes praised his players for making it four wins on the trot with a comfortable victory over Partick Thistle.

Niall McGinn's brace, as well as Calvin Zola and Michael Hector goals, meant the Dons climb to second in the Scottish Premiership.

"We've got players who can win us games," McInnes told BBC Scotland.

"And, with the effort and the determination, we're a tough nut to crack at times."

More than 10,000 fans watched the Dons beat Thistle for the second time this season.

Aberdeen now trail leaders Celtic by four points and look ahead to a home clash against Hearts knowing they have only conceded two goals in 11 games.

"I thought we defended brilliantly," said McInnes. "Really honest and diligent against a team who asked questions.

"They play the type of football that can frustrate a home crowd and we made the players aware of that. I don't think they caused us too many problems.

"We had to dig it out at times and work extremely hard for it. The quality of the goals were fitting to win any game."

On-loan Reading defender Hector crashed in the Dons' third from 20 yards and McGinn's fifth of the season - a well executed volley - rounded the evening off.

"There was so much good about tonight," added McInnes.

"The crowd, fantastic for a wet and windy night. Delighted how they stuck with the team and a great reaction to the players at the end. They enjoyed watching their team win again.

"It was important we looked after the ball when we got it and I wanted us to be a wee bit more positive in possession."