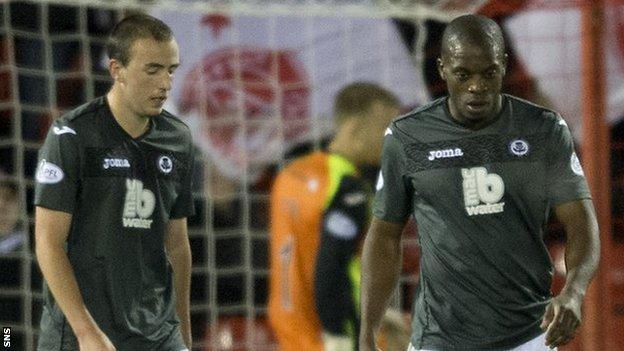 Partick Thistle manager Alan Archibald bemoaned his side's inability to learn from their early-season defeat by Aberdeen as they lost at Pittodrie.

The 4-0 defeat followed a 3-0 September reverse to the Dons at Firhill.

"I thought we gave them too much space and I thought we had learned from that from the first game, but obviously we hadn't," Archibald told BBC Scotland.

"They were more clinical, dominated the first half. We were a bit better in the second half, but I'm far from happy."

Gabriel Piccolo's second league start coincided with a repeat of his first - a heavy defeat by the Dons.

But Archibald refused to pick out the Mexican for particular blame after his performance in place of the injured Conrad Balatoni.

"He was missed for just his presence and his organisation," the manager said of Balatoni. "He's been very good for us.

"It is like any team, if you take somebody out the chain, it can be hard to replace sometimes.

"But, to be fair to the boy, Gabby came in and he did okay."

It was a soft free-kick that led to the third goal as well. I didn't think it was a free-kick leading up to the first goal

Archibald thought that Aberdeen's greater experience had shone through.

"For spells of the game, we can knock the ball about and we can be very good, but the big thing is decision-making - it wins you games at times and Aberdeen have a lot of experience and it showed that," he said.

"Aberdeen made the right decisions at the right times and put the ball in the right areas when it has to go."

Archibald disputed the free-kicks from which Niall McGinn opened the scoring and Michael Hector scored the third.

"Goals change games and they got a free-kick and it's hard enough coming to Pittodrie, but we lost a goal to a free-kick, which was disappointing," added the Thistle manager.

"They scored the second goal when we were doing okay and same with the third goal as well - nobody closed the ball down and the boy puts it in the top corner.

"When it goes to three, you are out of the game. At 2-0, we went two up top and had a go and obviously it'll leave gaps and we found that out to our cost.

"It was a soft free-kick that led to the third goal as well. I didn't think it was a free-kick leading up to the first goal."