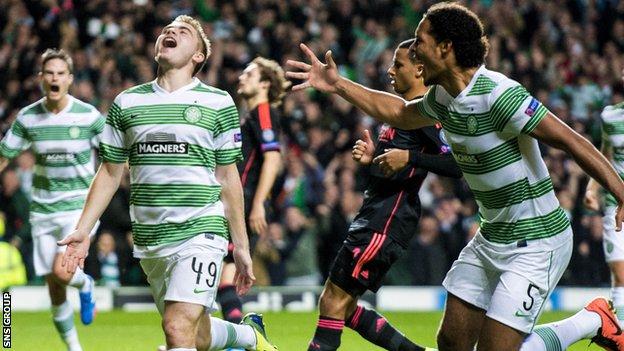 Celtic manager Neil Lennon believes his side will have to be close to their best against Ajax to take anything from .

Ajax go into the match bottom of Group H, two points behind Celtic.

Lennon echoed assistant Johan Mjallby's view that a win was not needed for the purposes of qualification.

And he added: "It's a crucial game. We know how difficult the game will be. Ajax are a very, very good side; an excellent side, actually."

The Celtic boss considers Ajax's status as the home side to make them favourites.

Unbeaten Barcelona lead Group H, two points above AC Milan ahead of Wednesday's meeting of those two sides at the Nou Camp.

"It's a huge incentive just to play in the Champions League," Lennon said. "It was very important that we got some points on the board with in the last game.

"But we're under no illusions how difficult this will be. Ajax were very unfortunate not to beat Milan in game two.

"The Champions League inspires players, it gets the best out of them. I'm hoping that's the case for our players.

"I want us to improve on our away form. If we are to progress, we have to pick something up away from home and this is the next game away from home.

"If we can get a point then if we can beat Milan at home, that gives us seven points. That would give us a real chance of qualifying."

Ajax sit sixth in the Eredivisie table and have only won one of their last five matches, while Celtic preserved their unbeaten Scottish Premiership run with a last-minute equaliser at home to Dundee United on Saturday.

Speaking before Celtic's departure to Amsterdam, Mjallby commented: "I think there's more pressure on Ajax because we are above them in the table.

"If we can take something from the game, we are still in a good position. A win would be a dream.

"We have already beaten them once so why can't we do it twice?"

Meanwhile, defender Virgil van Dijk insists he will not be distracted by the prospect of a call-up to the Netherlands squad as he bids to help Celtic claim a second successive win against the Dutch champions.

"That's not why I'm playing, but yes, there will be a lot of eyes pointing at my direction," said the 22-year-old.

"I feel okay about it. I need to handle it but I think it will be okay. I don't feel any pressure. I just want to play a good game and win it. That is what I am focusing on."