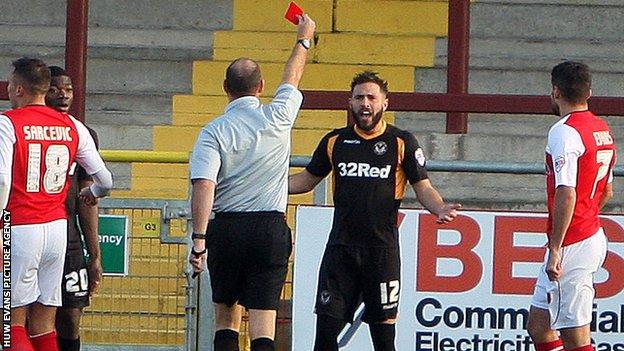 Newport have failed in their appeal against Robbie Willmott's red card during the League Two defeat at Fleetwood Town.

Willmott was shown a straight red card after blocking Steve Schumacher's goal-bound shot with his hand.

County appealed against the fourth minute sending off.

But a Football Association Regulatory Commission decided that it was not a case of wrongful dismissal.

Wilmott will be suspended for one match and will miss Saturday's FA Cup First Round tie at Braintree Town.

Newport did have their own penalty at Fleetwood, scored by Chris Zebroski, but straight after the match Newport manager Justin Edinburgh disputed the red card.

"I've got to be careful how I say this, but I think the man in the middle [referee Andy Haines] has stole the show from us really," said Edinburgh.

"Where do you want Robbie to put his arms? They're down by his side, he hasn't made an attempt [to lift them], he's just put his body across.

"We get a player booked and sent off for penalties conceded, they concede a penalty and nothing happens. Work that one out. It's very inconsistent refereeing."