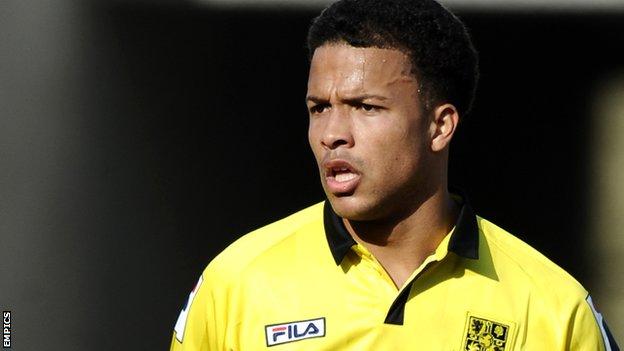 Tranmere winger Thompson, 24, began his career at Rochdale and had a loan spell at Spotland last season.

Rovers confirmed on Friday that Thompson had been diagnosed with nodular sclerosing Hodgkin lymphoma.

"Sometimes you just wonder - is it all worth it?" said Hill. "Why not just retire, live your life with your family and enjoy life to the full?"

The 44-year-old told BBC Radio Manchester: "I spoke to Joe about the whole situation and I'll try to offer every bit of support and love that I possibly can to him and his family.

I consider Joe to be part of my personal family as well as my football family. I'm sure he'll pull through and fight like he always has done

"I consider Joe to be part of my personal family as well as my football family. I'm sure he'll pull through and fight like he always has done."

Thompson, who played 164 times in his two spells with Rochdale, is set to begin a six-month course of chemotherapy.

He was present at at Deepdale, where supporters from both clubs took part in a minute's applause in the seventh minute - Thompson's squad number at Prenton Park.

Tranmere boss Ronnie Moore told BBC Radio Merseyside: "It was fantastic. The Preston crowd were brilliant and we appreciate that.

"He's got a hell of a fight on, but he's a fighter. He's got a one-year-old daughter and that will help him in his fight."

Rochdale fans also staged their own tribute during their