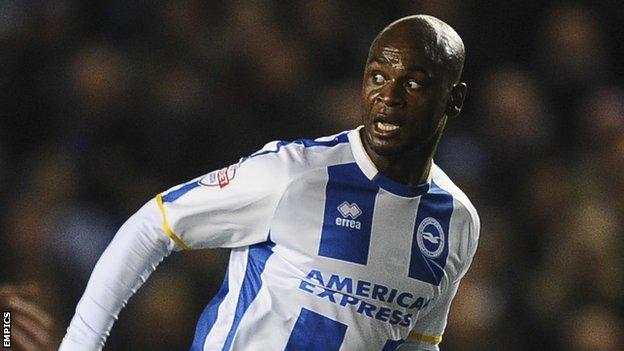 The 28-year-old netted in the 3-1 win at Doncaster, his third appearance as a substitute after joining from Swansea.

He told BBC Sussex: "I came here to play and score goals. Ashley Barnes has been working hard and the team has not lost, so I can understand where the manager [Oscar Garcia] is coming from.

"When I go on the pitch I do my best. Hopefully I can start the next one."

Lita, who has moved to the Amex Stadium until 1 January, came on from the bench against Yeovil and Watford prior to the trip to Doncaster on Saturday.

His 85th-minute goal put Brighton 2-1 ahead at the Keepmoat Stadium before a free-kick from David Lopez sealed their first win in six matches.

I played with his step-dad. That's when you know you are getting on a bit.

"It is always good to get that first goal," Lita said.

"The more important thing is I am really pleased for everyone as it is a long way to come and not get anything. We have been playing really well in the last few games and we got what we deserved.

"They came at us in the second half a bit more. They are a bit direct, getting balls into the box, and we let them put us under pressure a bit too much but we managed to grind it out."

Teenager Jake Forster-Caskey had put Albion ahead with an early long-range strike and Lita praised the midfielder after what was his first goal of the season.

"Jonesy [assistant coach Nathan Jones] and the manager have been getting on to the boys to have a few more shots.," he said.

"When Cas got the ball we gave him a shout as we all know he has a great left foot. It was a great goal.

"When I first came here I felt old because I played with his step-dad (former Reading and Brighton striker Nicky Forster). That's when you know you are getting on a bit.

"He is a great talent and I think he will go a long way. He has got a lot of quality."