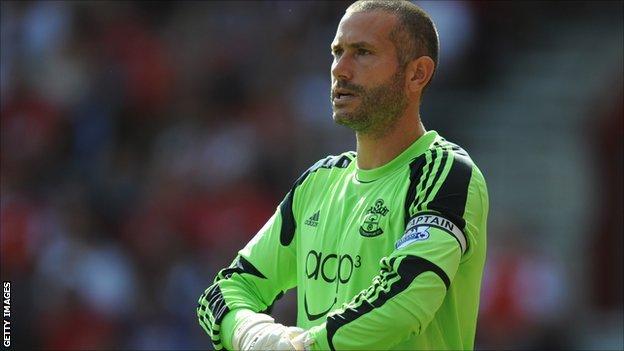 Southampton keeper Kelvin Davis admitted his time at Sunderland was one of the worst spells of his career, but says that he learned from the move.

Davis joined the Black Cats in 2005 for £1.25m but was part of the Sunderland team that was relegated and at one point was confronted by an angry fan.

The Saints travel to the Stadium of Light on Wednesday in the League Cup.

"I don't look back at it as a successful playing part of my career," Davis told BBC Radio Solent.

Davis began his career at Luton and had spells at Wimbledon and Ipswich before he joined Sunderland in June 2005.

However, he lasted just one season with the Black Cats before being sold to Southampton.

"It's been such a long time since I've been at Sunderland," added Davis.

"They've had their ups and downs as I have. A lot of water has gone under the bridge since I was there but you always want to do well for the team and for yourself, and the fact we're at Sunderland has no bearing on me."

Davis was also beaten from 45 yards by Portsmouth midfielder Matthew Taylor in his season at Sunderland, but he says his spell at the Stadium of Light has made him a better keeper.

"I look back at it as a learning part of my career," he said. "The lessons I learnt there I still use today and they make you stronger and give you different experiences for now and the future."