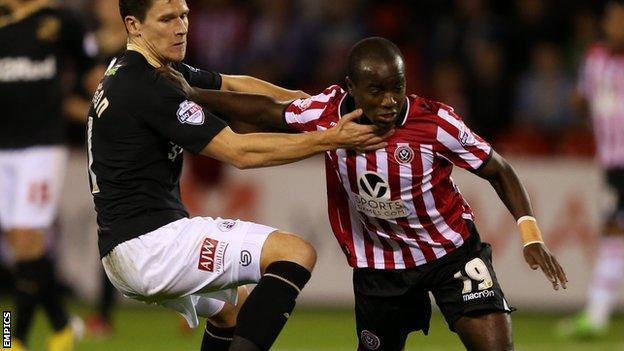 The 24-year-old was shown a straight red for the second time this season in Saturday's 2-0 defeat at Shrewsbury and will now serve a four-match ban.

"Everyone loses their temper but sometimes you just have to get on with it," Miller told BBC Radio Sheffield.

Saturday's dismissal was the fourth time the former Manchester United trainee has been sent off in the Football League. His first red card came during a loan spell with Swansea at the age of 19.

"He's one of the players who can make a big difference so that's the frustrating thing."

He added: "It made us very difficult to get something from the game and I think we would have got at least a point if we'd kept 11 men on the pitch.

"The lads have let him know how they feel about it. I'm sure he'll come back stronger."

Meanwhile, Miller is hopeful he could be in line for his first start this year in the coming weeks.

The 26-year-old suffered a cruciate knee ligament injury in the win over Scunthorpe last Boxing Day but has now come off the bench three times in the last month.

"I'm feeling really good and I'm delighted to be back involved in the first team again," he said.

"It's progressing nicely, I'm feeling better every week and I got 90 minutes with the reserves last week.

"I'm ready to go from the start when the gaffer gives me the nod."