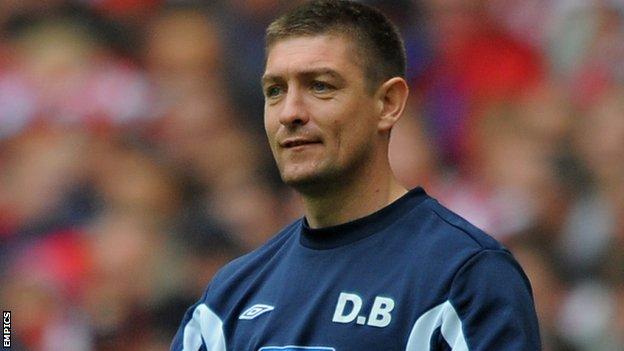 Barrow boss Dave Bayliss has left the Conference North club by mutual consent and player-coach Alex Meechan has been placed in caretaker charge.

Bayliss departs with Barrow 18th, above the drop-zone only on goal difference.

The 37-year-old initially took over as joint boss with Darren Sheridan during the 2007-08 season and they immediately won promotion to Conference Premier.

They added the FA Trophy two years later, but were relegated in 2013 - Bayliss's first season as sole manager.

Darren Sheridan and Dave Bayliss guided Barrow to five years of success but Bayliss's 18-month spell as sole manager has left the Bluebirds 25 places lower in the football pyramid.

A club statement said that it had "agreed by both parties that the situation had reached a point of no return".

Prior to last term, Bayliss had been a part of the club's most successful period in a decade.

In 1999, the club was thrown out of what was then the Conference National because of financial irregularities and it was not until the reign of Sheridan and Bayliss that their nine-year exile from non-league's top-flight was ended.

Phil Wilson was sacked as Barrow manager in November 2007 with the club sitting 15th in Conference North, but the new management team then enjoyed an impressive run than culminated in victory over Stalybridge Celtic in the play-off final.

Then, after three years of narrowly avoiding relegation, Barrow finished 13th in 2012, but that achievement was tempered by

Barrow suffered relegation the following year and that poor form has continued this term, costing Bayliss his job.