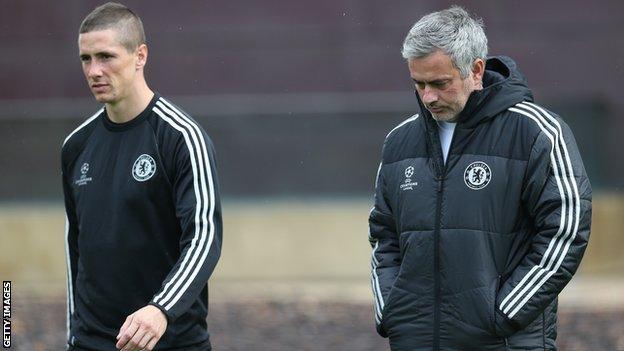 Fernando Torres is out of Chelsea's next two games because of a leg injury, says manager Jose Mourinho.

The 29-year-old will miss his side's Champions League group game against Schalke on Wednesday and Saturday's Premier League game against West Brom.

The striker is also set to miss Spain's friendly against Gabon on 19 November.

Fernando Torres has scored five goals in 12 outings for Chelsea so far this season.

"Fernando Torres is out, we need to wait for the scans on Wednesday," said Mourinho. "It is easy to say he is out [against Schalke] and Saturday too."

Ex-Liverpool forward Torres has been showing signs of returning to some of his best form with three goals in his last three games for Chelsea.

However, Mourinho says his absence will give strikers Samuel Eto'o, 32, and Demba Ba, 28, their chance to stake a claim for a place in his side.

"They have the chance to play up front," said Mourinho. "That has to be a good motivation for them and hopefully they can express on the pitch the way they work."