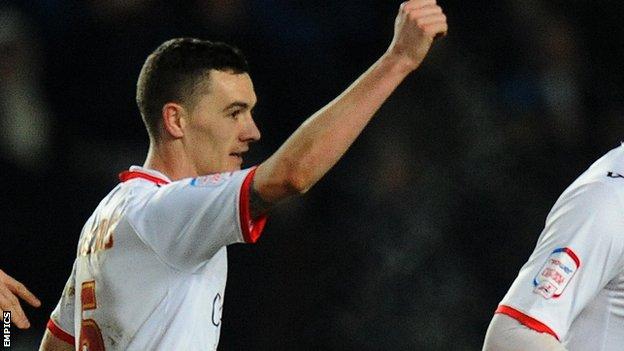 MK Dons centre-half Shaun Williams will aim to contribute more than 10 goals for his side this season, after already reaching six.

The 27-year-old is MK's second-highest scorer, behind striker Patrick Bamford on 12.

Four of his strikes have come from the penalty spot and two from free-kicks.

"I got six last year and I'm on six already. If I make double figures I'll be happy," the Irishman told BBC Three Counties Radio.

"Hopefully I'll get a few from open play in the next couple of games. Patrick has been hoovering up most of the goals, so I'll chip in with what I can."

Williams scored the only goal in to record only a second victory in six League One games for Karl Robinson's side.

The Dons lost four of their five league fixtures in October, but remain just a point outside the play-offs.

"We look back and obviously we could have picked up a lot more points but it wasn't too much of a hit for us," added Williams.

"On Saturday we didn't play to what we can and still got the three points. We can take a lot from that.

"If we can get the blip out of the way now and push on for the rest of the season, we won't really look back at October as a blip. It was just a way to the end of the season."