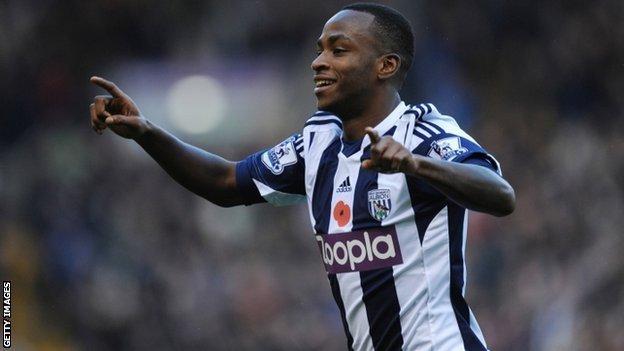 That the West Brom striker is still among the lowest-paid players in the top flight is, in itself, a reflection of just how quickly his life has changed.

A few short months ago, he was a promising talent few outside the West Midlands had really heard of. He didn't have an agent and had been loaned out to Northampton Town,Brentford and Peterborough United. He was one for the future.

Today, the 20-year-old is considered one of the game's rising stars, an explosive attacker whose surge to prominence has taken him to the brink of the England squad.

He scored the winner at Old Trafford and found the net against Arsenal after becoming the first West Brom player in 20 years to score a hat-trick on his full debut. Ten goals in seven starts this season for the Baggies and England Under-21s, and all on £850 per week. That's less than some Premier League kit men earn.

Money is not important to the boy from Burundi. Berahino grew up surrounded by poverty. As a child, he made his own footballs from plastic bags and shoelaces. He played in the streets.

The thought of being paid to play football was beyond his dreams and he is grateful to have been given a second chance at life after fleeing with his mother Liliane as a brutal civil war tore his troubled homeland apart and claimed the life of his father.

We're in negotiations [over a new contract]. If I was the club I would get it done as soon as possible

When the time comes, he will be paid what his performances deserve. That time is now.

West Brom are, unsurprisingly, working on a new deal. Manager Steve Clarke has urged the club to move swiftly to secure Berahino's long-term future, with his contract set to expire next summer. "We are in negotiations with Saido's representatives and if I was the club, I would get it done as soon as possible," he said.

"He has had a good season, and long may it continue."

Clarke is, however, wary of placing too much expectation on the shoulders of the young forward.

"All I would say is that he is a young boy that, a few weeks ago, nobody was talking about," the Baggies boss said. "You have to keep the level of expectation down. In this country we are too quick to push people forward as the next big thing. For Saido, the most important thing is that he continues to develop as a player.

"People are trying to push him too far too quickly. Give the boy time to grow and develop."

With the likes of Arsenal, Everton and Monaco monitoring the situation, time is of the essence. West Brom have made an initial offer of around £10,000 per week. But if Roy Hodgson does hand him a call-up to the England squad for the friendlies against Chile and Germany, the club may find themselves needing to up that significantly.

Last Saturday, Berahino delivered the England manager a timely reminder of his talent 13 minutes after coming off the bench to replace the injured Billy Jones. The finish to help see off Crystal Palace, as against Manchester United and Arsenal, was cold-eyed and clinical.

The striker may be developing quickly under Clarke but his feet remain firmly on the ground. After his matches, he goes back to his mother's house to talk over his performance, the good and the bad. She is an Arsenal fan, her son has a soft spot for Manchester United.

Those allegiances go back to their life in Bujumbura, the capital of Burundi - one of the world's poorest countries. There was violence and disease. The civil war forced them to flee for England in 2003, six years after his dad died in the troubles.

The circumstances around his father's death remain a mystery. Even at the age of 20, Berahino dare not ask how or why he died. And yet, his father remains the inspiration for his success as a footballer. He does it all to make his late father proud, with his mother as his guide.

When he arrived in England as a 10-year-old, football was the vehicle that allowed him to be accepted at Aston Tower Primary School. A year later he was picked up by the West Brom academy and now he is dreaming of making a late charge into the England World Cup squad.

Whispers suggest Berahino is in Hodgson's thoughts already and could be called up in the week ahead.

That would mark the high point of a career that has the potential to take the youngster anywhere. Berahino has come so far, but there is a sense he still has much further to go.