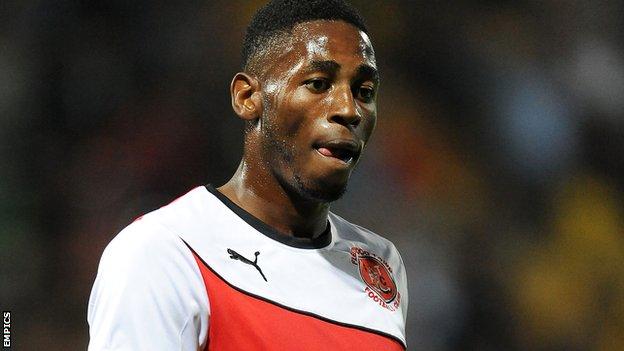 Record signing Jamille Matt will be out for at least a month with an ankle injury, Fleetwood manager Graham Alexander has confirmed.

The 22-year-old, who in January, has scored seven goals in 15 games this season.

"It was an innocuous thing, with no-one near him in training," said Alexander.

Despite Matt's absence, to move two points clear at the top of League Two.

David Ball, Matt's replacement in the starting line-up, scored one of Fleetwood's goals against the Exiles and Alexander is confident he has enough attacking options to cope with the loss of his top scorer.

The 42-year-old told BBC Radio Lancashire: "It [Matt's injury] is disappointing because we have got a tight squad and he's already shown that he's a really good player for us.

"David Ball has come in and taken his opportunity. We've got and we've got Jon Parkin as well, so we've got three strikers."