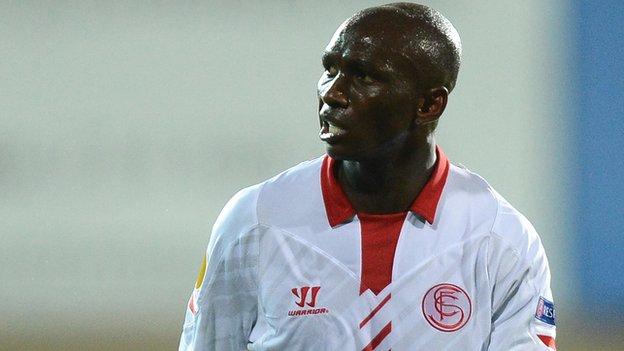 Stephane Mbia is in the Cameroon squad for the 2014 World Cup play-off second leg at home to Tunisia after recovering from injury.

The Sevilla midfielder missed last month's first match, which ended 0-0, because of a foot problem.

Cameroon coach Volker Finke will be delighted to be able to call upon the services of Mbia for the 17 November match in Yaounde and has also been able to select four others who are fit again - Landry Nguemeo, Henri Bedimo, Gaetang Bong and Loe Raoul.

Finke has also called up Guingamp goalkeeper Guy Roland Ndy Assembe, who last played for the Indomitable Lions under Jean Paul Akono, against Albania in November 2012.

Vincent Aboubakar is another player who returns after an absence - last representing Cameroon in June - and comes into the squad in good form having scored five goals in 12 games this season for Lorient.

There is also a surprise recall for Benoit Assou-Ekotto, who had registered his discontent at the treatment he gets in the national team and was not selected for the first leg.

Recently, a member of the technical staff was sent to persuade the QPR player to come back to help the team and there has been speculation that he would only come if he is part of the starting team on Sunday.