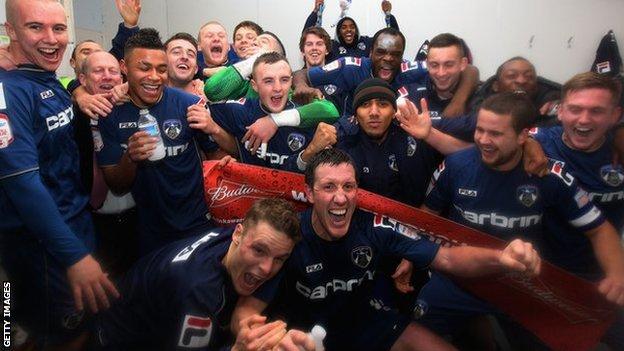 Manager Lee Johnson does not want Oldham to get carried away as they look to repeat last season's FA Cup heroics.

They beat and on their way to the fifth round before

on Saturday, and while playing down expectations, Johnson would welcome a cup run.

"We all think that, but we've got to take this game as it is. It's a first-round tie and it's a tough game," the Latics boss told BBC Radio Manchester.

"We've got to get the boys thinking about that and nothing about the future."

Wolves, who were playing Premier League football as recently as May 2012 before suffering consecutive relegations, will be featuring in the first round for the first time since November 1988.

Kenny Jackett's side have made a fine start to the season and lie second in League One.

"If you're going to win it, you've got to beat them all," joked Johnson, who will be managing in the FA Cup for the first time.

"But it [a big cup tie] is so important for a club like us. We've got to make sure we come into with a really good attitude against a top Wolves side."

Striker Jonson Clarke-Harris is likely to be involved for the Latics, although the 19-year-old has been warned that any repeat of the simulation that saw him booked in their last time out will not be tolerated.

"It's embarrassing for me and it doesn't look good," said Johnson.

"I don't think he does it for the wrong reasons, but he did dive and he goes down too easily. Under my stewardship, hopefully he'll stop doing that. If he does keep diving, he won't play."