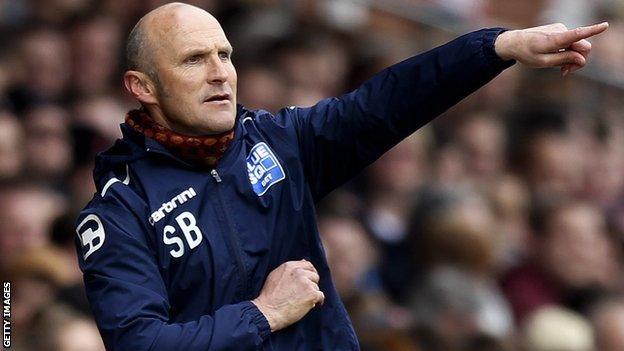 Kidderminster Harriers boss Steve Burr has opted to stay at Aggborough after turning down an approach from Conference Premier rivals Forest Green.

Burr, who missed Saturday's 1-0 defeat at Barnet, was given permission to talk to the Gloucestershire club last week.

But, after agonising over a move that would have significantly increased his salary, Burr has remained loyal.

"I did speak to Forest Green but I just got the feeling that it wasn't for me," Burr told BBC Hereford & Worcester.

"It's been quite difficult. I kept to-ing and fro-ing as to whether it was the right thing to do.

"I know the budget at Forest Green is probably double our budget but that wasn't a factor. Everything about it didn't really excite me.

"We've got a good team here, we're second in the division.

"I've been here four seasons, we've moved forward year on year and I've built up a good relationship with the supporters, which means a lot to me.

"All along that was burning away at me. Why did I need to speak to somebody else?

"The decision now for me is to continue here and try to achieve something."

Bookmakers had the 50-year-old Burr down as a short-priced favourite to be appointed by Forest Green this week.

But Burr and his management team of Gary Whild and Steve Guinan are still committed to the cause of bringing League football back to Aggborough.

"I spoke with Steve and he has made his position very clear," said Harriers chairman Mark Serrell.

"Understandably we are all delighted with that. Now our sole focus is on allowing Steve, Gary and the rest of the camp to continue with preparations for this weekend's FA Cup game with Sutton United."

"However after a positive discussion there, he has indicated his desire to remain in his position at Kidderminster Harriers and no longer pursue any alternative options."

Burr has been in charge at Aggborough since 2010, leading the club to successive sixth-place finishes, just short of the play-offs, before last season's near-miss, when the Harriers lost out in the race for automatic promotion by just two points.

They currently sit in the runners-up place again this time around, 13 places and 11 points better off than Forest Green, who they hammered 4-1 when the two sides met last month.

Forest Green, who parted company with Dave Hockaday on 21 October, had lost eight of their previous nine matches until beating Dartford on Saturday.

After interim manager Gary Seward left the club after it became clear that he was not in the running, academy manager Scott Bartlett remains in charge of the Rovers first team.