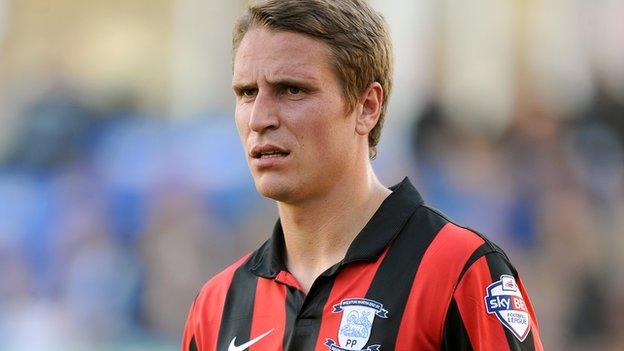 But they have lost the services of fellow loan man Cristian Lopez, 24, who has been called back by his injury-hit parent club Huddersfield Town.

Shrewsbury have also been hit by an injury blow to left-back Joe Jacobson.

The scorer of Town's opening goal in Saturday's 2-0 win over Sheffield United has been ruled out for three weeks with a hamstring problem.

Nicky Wroe began his career at Barnsley and went on to play for Bury, Hamilton and York before joining Town for the first time from Torquay in January 2011. He left following promotion in the summer of 2012 for Deepdale, along with Shane Cansdell-Sheriff

But the extension of 28-year-old Wroe's loan, just 11 days after he initially returned to his old club for a month, is a big plus for Town boss Graham Turner.

"Nicky Wroe is a combative midfielder who knows what the game's all about," Turner told BBC Radio Shropshire.

"He's powerful, he gets in the opponents' box, and he can score goals.

"It's been relatively easy for him to come back here and go into the side."

Wroe has been made available by Preston for this Saturday's FA Cup first round tie at League One rivals Walsall, but Town have had no such luck with regard to two of their three other loan players.

Wolves have refused permission for young Irish striker Liam McAlinden, who is on loan until January, to play in the tie, while Lopez has already gone back to Huddersfield, having scored once in his five games.

Shrewsbury remain hopeful that Middlesbrough will allow them play to play midfielder Adam Reach at the Bescot Stadium.