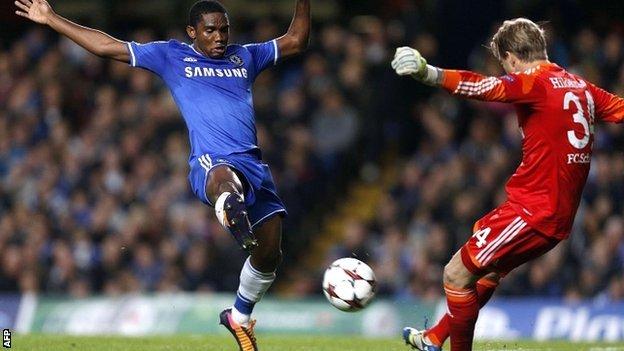 The German side started positively and twice could have gone ahead as Julian Draxler and Adam Szalai fired wide.

But they gifted Chelsea the opener when goalkeeper Timo Hildebrand had his kick charged down by Eto'o.

Draxler had a shot saved after the break before Eto'o collected Willian's pass to fire in with Demba Ba scoring a volley on the turn late on.

Victory for Chelsea moves them three points clear at the top of the group and a draw in their next game at Basel will guarantee their passage into the competition's last 16.

While it was not a devastating response to the 2-0 defeat by Newcastle last Saturday, where Blues boss Jose Mourinho said he made 11 mistakes in referring to his team selection, it earned Chelsea their third successive win in Europe.

And it showed that despite his age, 32-year-old Eto'o has a big part to play in Mourinho's plans this season after scoring his 28th and 29th Champions League goals.

Eto'o, who was in the side in place of the injured Fernando Torres, was one of six changes to the team, with Eden Hazard not making the squad after Mourinho said he "missed a crucial training session".

The Chelsea manager also said his team had forgotten "why we win" after losing in the north east last weekend and they still looked like they were having memory problems as they gifted the ball too easily to Schalke early on.

The two near misses by the visitors, who are sixth in the Bundesliga, seemed to shake Chelsea from their slumber, though, and after beginning to string their passes together, Andre Schurrle tested Hildebrand with a curling free-kick after 20 minutes.

That led to a better spell for the hosts but they could not have foreseen the present they were given after 31 minutes.

There appeared to be no danger as Hildebrand shaped to kick the ball out but he took his eye off the on-rushing Eto'o, who closed the 34-year-old German goalkeeper down and deflected the ball into an open goal.

Roared on by their vocal supporters, Schalke started the second half as they did the first as Draxler again went close, Petr Cech diving to his right to tip the angled shot around the post after 52 minutes. The save proved crucial.

Two minutes later, Eto'o extend Chelsea's lead and this time there was no fortune involved. Willian collected the ball in midfield, burst forward and slipped the ball to his team-mate, who took a touch and found the bottom corner.