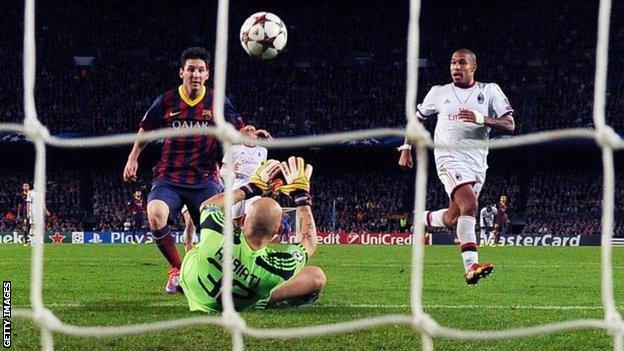 Lionel Messi scored twice for Barcelona as they booked their place in the knockout stages of the Champions League with a comfortable win over AC Milan.

Messi scored his first goal in four games with a penalty after Neymar had been fouled by Ignazio Abate.

Sergio Busquets headed in a second from Xavi's free-kick before the lead was reduced when Kaka's cross was turned in by the unfortunate Gerard Pique.

Messi clipped in his second after a swift one-two with Cesc Fabregas.

The result extends the Catalan side's lead at the top of Group H to five points over the Italian club, who have five points with two games to play.

Milan now travel to Celtic knowing that victory could also see them progress into the next round.

Barcelona had 63% possession and 19 shots on target - more than four times Milan's total.

Neymar came close early on when he collected Messi's through-ball only to see his strike blocked by Urby Emanuelson.

Milan keeper Christian Abbiati then denied Neymar and Alexis Sanchez before Barca finally made the breakthrough from the spot.

Xavi chipped a ball over the Milan defence for Neymar, who was tugged back in the area by Milan defender Abate.

Messi smashed in the resulting penalty for his first goal since scoring in the reverse fixture against Milan two weeks ago.

Barca then doubled their lead when midfielder Busquets stooped to head past Abbiati from Xavi's teasing delivery from a free-kick.

Just before half-time, Milan were given a lifeline when Pique turned Kaka's low delivery into his own net.

Milan boss Massimiliano Allegri, whose side are only 11th in the Serie A table, brought on striker Mario Balotelli for the ineffective Robinho after the break but it made little difference as Barca dominated.

Abbiati produced a great save to prevent Andres Iniesta from scoring before the keeper pushed away Sanchez's point-blank effort.

But he could do little to stop Messi from scoring the third, when the Argentine linked up with Fabregas before skipping through the defence and lifting his shot high into the net.