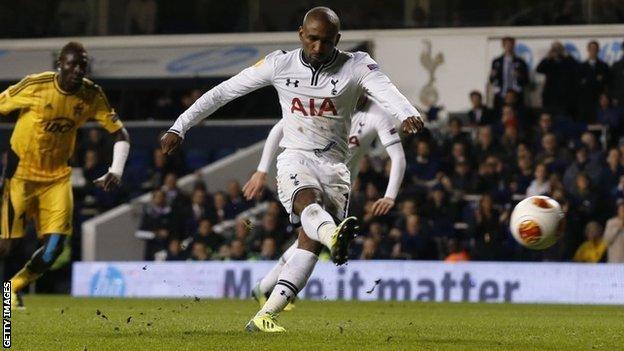 Jermain Defoe scored a club-record 23rd European goal to give Tottenham victory over Sheriff Tiraspol and a place in the Europa League knockout stages.

The England striker scored a penalty to move ahead of Martin Chivers and add to Erik Lamela's first goal for the club.

Lamela finished calmly before earning Spurs their penalty when fouled by Djibril Paye after a mazy run.

The hosts' defence was breached for the first time in Europe this season when Ismail Isa scored, but they held on.

Brad Friedel is the oldest player to play in the Uefa Cup/Europa League at 42. The previous record holder was FC Twente keeper Sander Boschker, who is still playing after making his debut for the club in 1989

There was a sense of relief mixed with inevitability when Lamela hooked home on the hour as Tottenham, with nine changes from their draw against Everton, had laboured towards an expected victory.

An uneventful first half gave hope to their Moldovan visitors, who have never won away in the Europa League, but a second-half double secured Spurs's sixth win in Europe this season and progression from Group K.

Andre Villas-Boas's side are through two games quicker than last season - and the win extended an impressive run of form which has seen them lose just twice in 18 matches.

Record signing Lamela was influential throughout and threatened tentatively in a first half void of clear openings for the home side.

The Argentine had a half-hearted penalty appeal turned down early on before a long-range effort from team-mate Mousa Dembele forced the first save of the game from Vjekoslav Tomic.

Spurs, though, struggled to penetrate the visitors and it was a quickfire break led by attacking midfielder Ricardinho which fashioned the half's best opening for the visitors as Isa's shot beat Brad Friedel but cannoned back off the post.

Friedel was deputising for Hugo Lloris, rested after being knocked out in the draw with Everton, and the 42-year-old was able to watch on as Ricardinho then shot wide from a good opening.

Defoe could not turn home Gylfi Sigurdsson's cross on the stroke of half-time, but his and Spurs's fortunes improved as Lamela gained in influence after the break.

Christian Eriksen smashed a shot from range which drew a good save from Tomic before the Danish midfielder inadvertently found Lamela 12 yards from goal for the 21-year-old to finish crisply.

The former Roma player's weaving run into the area drew a touch from Paye seven minutes later, allowing Defoe to lift his penalty high into the net in front of the watching Chivers.

Five minutes later, Friedel could only parry Cadu's shot into his six-yard box allowing Isa to volley home a consolation, but Spurs comfortably held on and a point in Tromso in three weeks' time will likely prove enough for them to top the group.